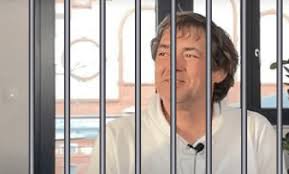 Michael Ballweg, Swabian from Stuttgart, chief organiser of last years  ‚Summer of Freedom‘ in Berlin is held  in custody for alleged embezzlement of funds and risk of escape. The  German prison  for state security JVA in Stuttgart-Stammheim, the German Belmarsh, became notorious when in the 1970s  RAF terrorists were held there.

Michael Ballweg is a political prisoner, says his lawyer Ralph Ludwig. The IT expert and successful entrepreneur represented a typical German middle class career until early in 2020. But when a globally orchestrated repressive health management suddenly deprived German citizens of basic constitutional rights, freedom loving, creative networker Ballweg began to organize. In no time he twice brought about a million people to the German capital in defense of the „Basic Law“, the German provisional post war constitution. „Frieden, Freiheit, keine Diktatur!“ (freedom, peace and no dictatorship) was the melodic triad that united men and women of all ages and social strata. They donated graciously and fulheartedly  to support Ballweg’s extraordinary mobilizing efforts. The entrepreneur himself had sold parts of his business and given away a considerable  deal of his own income for one noble purpose:  Defense of Human Rights. But whereas the collective West hails human rights defenders elsewhere, they are not so welcome at home. Accordingly the people’s groundswell movement was immediatelly brown smeared, so that the collective ‚Left‘ would by not means join. On the contrary, their fake „Antifa“ branches mobilised juveniles and even raging grannies  to participate in the blame game. All coherence gone. History has been turned upside down. Those who recalled the Third Reich were immediatelly libeled as anti-semitic. The absurdity of accusations knew no boundaries, but still the groundswell gained momentum.

Friendly. creative, open minded Ballweg, used to thinking outside the box, quickly called his amazing intitiative „Querdenken“ and had it patented under the postal code of „Stuttgart 711“ . But every community was free to use their own postal code in orgainising protest against an absurd and counter productive national health management. And people did rise nationwide to call out safety measures that had turned everything related to medicine over night into a dark and repressive farcical.

As proud citizens of the economic powerhouse of the Porsche and Mercedes ‚Ländle‘ Baden-Württenberg in SouthWest Germany Ballweg and his friends also remember Friedrich Schiller’s freedom hero Tell and the famous Rütli Oath. Given their strong cultural and democratic traditions they simply wouldn’t have it that essential articles of the ‚Basic Law‘  be wiped out in no time and the economic efforts of their renown diligance be destroyed wilfully.

The response to the Swabian’s call was a groundswell of spontaneous  organizing in all parts of Germany. In spite of a massive police force and a blackening media campaign the first two big marches on Berlin in 2020 were a major success that even gained international traction. JFK’s nephew Robert Kennedy addressed the crowd, yet even his  amazing speech was under reported.

But in spite of their playing down the numbers game, those in power knew exactly what was coming and so they played dirty. They applied all their age old tricks to prevent a repetion of a „Querdenken“ – success in Berlin 2021. Whereas on „Christopher Street Day“ massive crowds were accepted without any health restrictions to be followed, Querdenker and affiliate assemblies were charged with heavy mandates and than simply banned, prohibited and forcefully made impossible. However, the movement still seemed unstoppable. It continued on  a regional and local scale. The ‚Monday Evening Walk Movement‘, focusing against  VAX mandates gained momentum. Monday evening walk outs attracted followers in almost every village with ten  if not hundreds of thousands of participants each week until the intended  law was overturned in March this year.

Meanwhile many careers of open minded and outspoken democrats were ruined. Among the most prominent voices silenced is Body Schiffmann, a once highly respected, internationally reputed otolaryngologist doctor. He and his family left Germany and sought exile in Tansania. The Swiss blogger Roger Bittel (@BITTELTV-einfaach anders)  has gone there, too and keeps his followers informed from Africa.

This is an alarming sign, reflecting the present state of affairs and not only in Germany pretty well. Lawyer  Alexander Christ just published his latest book „Corona Staat“3, in which he denounces the loss of the rule of law in Germany.

Like Michael Ballweg the lawyer strives for ‚Freedom, Peace and Democracy‘. So do milions of German people inspite of their reputation which has been destroyed over decades by libeling the entire nation as proto fascist. Libeling, character assassination and taking out beloved or simply influential and courageous spokespeople has always been an instrument of those in power, applied successfully over and over again. Only public awareness, education and free thinking can make these tools less effective.

We must not become weary of repeting this eternal truth and keep it in mind.

The family man and entrepreneur Michael Ballweg is a balanced, quite character. He likes to meditate and seeks dialogue with everybody. As a gifted networker and organiser behind the scenes, he rather shies the limelight. In his interviews he was always straightforward, frank and perhaps politically a little too inexperienced to foresee the wiretraps set out for him.

Personally, I was moved to tears when he quoted Friedrich Schiller’s verse in 2020 on stage in Berlin-Tiergarten:

Quoting the German freedom poet Ballweg reminded his audience that Germany’s strength does not lay in military force, but in struggling with false conceptions.  This is why the country was once called the country of poets and thinkers and later of engineers, too. But there are mighty interests at stake who want to prevent Germany from rising to its former intellectual and cultural capacity again and from upkeeping its economic power. Ballweg represents everthing the powerfull „elites“ want to destroy. The man has made himself more powerful enemies by inventing a „freedom phone“, thus avoiding Apple applications.

In November last year he dared to join hands with the „classical peace movement“ by being one of the first signatories of the „New Krefeld Peace Apeal“ https://peaceappeal21.de, an effort to reconcile the „left leaning“ peace movement with the new Querdenken movement for the saveguard of democracy, which he had originated. This move must have alarmed the ruling elites who had taken great effort to undermine the once successful peace movement into nothingness. This move somehow recalls Martin Luther King and his famous ‚Mountaintop Speech‘. It also recalls Carl von Ossietzky, the German pacifist and Nopel Peace Prize winner of 1936, who died after released from a Nazi prison camp. In his last last article in „Die Weltbühne“ in 1932 he called on the peace movement to become political, by which he meant to chose sides.

Ballweg sits isolated in Stuttgart-Stammheim, waiting for his case to be examinated. A team of good lawyers work on his defence. However, only his closest allies and good lawyer friends, courageous souls like Dr. Bodo Schiffmann now from Tansania and Ralph Ludwig, living in Mallorca (Spain) dare openly to promote solidarity with the German civil liberties defender. The otherwise well intentioned and informative Swiss Blog „Transition-News“ even published a smear article soon after Ballweg’s imprisonment https://transition-news.org/ballweg-ist-kein-gandhi-oder-assange-sondern-radikalisierer-und-spalter#forum10433

Yesterday, on August 1st perhaps twenty thousand people gathered in Berlin amidst a „week of democracy“ in commemoration of the historic event of 2020 that could not have taken place without Ballweg. However, according to „Der Tagesspiegel“ 4only several participants asked for the release of Michael Ballweg. And in deed, there is too little solidarity reflected in the social media scene either. Have prominent voices been successfully shied away or even been bought of, so that they avoid taking sides? Whatever the excuse may be, without any doubt: Ballweg has been character assassinated from within long before the police raided his house.  As Ralph Ludwig has pointed out, the tactical move against Ballweg, aims at preventing a successful opposition to be mounted against the expected unrest in fall, when people will fully realise the results of the truly disastrous sanctions policies, in which our government plays a key role. Every household will feel it in their pockets. In fact  strangely enough, the economic war against Russia is lead first and foremost against the German people.

The illegal imprisonment of Michael Ballweg, just as the unlawful incarceration of Julian Assange and the historic killing the German journalist Carl-von-Ossietzky  and of Civil Rights leaders like Martin Luther King aims at destroying knowledgable, intelligent and peaceful resistance. Resistance against repression, social and racial injustice and war mongering policies needs charismatic and courageous spokespeople.  This is why we all have to step forward and demand: Free Julian Assange and free Michael Ballweg now!