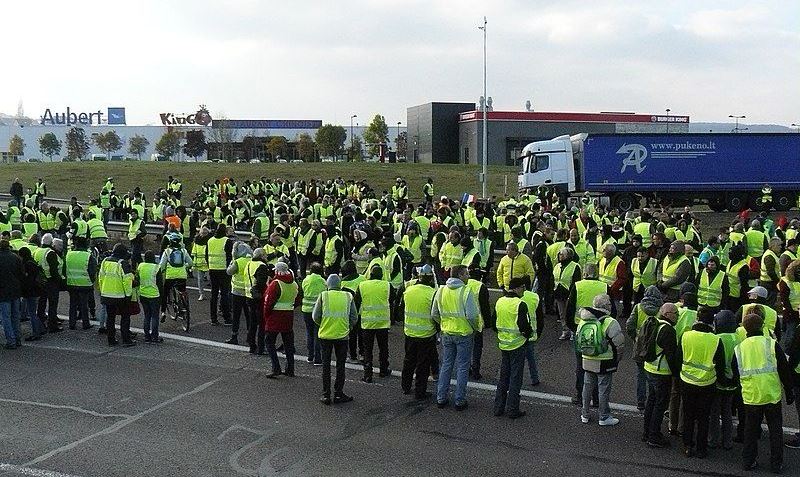 Well, what d’you know, regular as clockwork, Russia is being blamed – again – for “sowing social division” in Western states. This time, it’s the ongoing nationwide public protests in France against economic austerity which some Western media outlets have claimed are being “amplified” by Russian influence.

One of the media outlets carrying such claims is British newspaper, the Times of London. Last month, this same supposedly serious paper published claims that a popular Russian cartoon series, Masha and The Bear, was trying to “subvert” Western children with “pro-Russia” sentiments. After that ridiculous piece of garbage journalism, what credibility has the Times got to now push claims that Russia is behind the social protests engulfing France? Exactly, enough said.

France has been roiled by nearly five weeks of anti-government demonstrations, popularly referred to as the Yellow Vest movement. Protesters are planning to stage rallies in the capital Paris and other major cities this weekend for the fifth consecutive week. Clashes with riot police and burning vehicles in the Champs Élysées and other iconic public venues across France certainly speak to the gravity of the social anger being expressed by millions of French people.

The French public are incensed by mounting economic hardship under the government of President Emmanuel Macron, the former investment banker who wants to gut workers’ rights and social benefits under the euphemism of “reforms”. That’s after he and his wife recently redecorated the gilded Élysée Palace with ornate furnishings, wallpaper and carpets to the tune of €600,000. Many French workers are struggling to even heat their homes, such is prevalence of poverty.

This week, Macron made a nationwide televised address from this same gilded palace in which he appealed for calm and stated that the authorities would belatedly make concessions in an attempt to alleviate anger over tax and other economic issues that the French public say have hit them hard with deprivation.

Nevertheless, many French citizens say that Macron’s concessions are not nearly enough to appease their grievances. They have vowed to continue protesting, despite a terror incident this week in the eastern city of Strasbourg in which a gunman apparently killed three people. French authorities have urged protests to be called off in the aftermath of the tight security situation. The protesters have so far refused to call off their nationwide demonstrations.

It seems significant that as the Macron government is increasing its pressure on protests to subside – no doubt out of alarm that the authorities are losing control over the populace – then this week the media are lately reporting on claims that Russia is “amplifying” the unrest.

Jean-Yves Le Drian, the foreign minister, told French media that his government was launching a probe into allegations of Russian incitement of the Yellow Vest movement. It seems like a cynical distraction to undermine the legitimacy of public fury.

What are the allegations of Russian interference based on? Apparently, the Times of London and other Western media outlets reported that “Russian-linked” social media posts are commenting on the protests. So too, it is claimed, Russian news media have devoted undue coverage to the French demonstrations.

So, let’s get this straight. Russian social media users and Russian news media are to blame for “amplifying” French unrest because they happen to report or discuss such unrest. The logic is absurd. No doubt millions of people in countries around the world as well as their news media are commenting on these momentous events in Europe. Just because Russians are doing that, then this is cited as “evidence” of Russian interference. What underlies that ludicrous conclusion is the most fatuous prejudice of Russophobia.

Western states are living in denial. Deep social problems from poverty under their failed economic policies and from disenfranchisement under failed political governance are inherent causes. Yet in spite of the systemic failure, Russia is cast as the scapegoat, rather than looking inward at the inherent causes.

We saw this in the US after the election of maverick outsider Donald Trump as president and with Britain’s Brexit referendum to leave the European Union. Those events were the result of discontent within those societies with regard to the status quo. Rather than dealing with their inherent social, economic and political problems, certain elements within the ruling class in the US and Britain sought to explain away the failing by pointing the blame on Russia.

The same tawdry thinking is being invoked with regard to the French protests.

Admittedly, however, the tedious narrative of blaming Russia is wearing thin, and so the latest claims about Russia stirring up the French are not being too widely played in Western media, no doubt because of a realization even by the Western media that such claims are idiotic. Again, after the Masha and the Bear farcical “report”, the Russian “red-baiting” in Western media has lost any potency it may once have had.

Western states are indeed confronting huge challenges from their own populaces. Poverty, social injustice, unemployment, crumbling public services, rampant alienation from state institutions, disgust with criminal militarism, among other grievances, are all motivating popular discontent and anger. The French protests are symptomatic of an international revolt against injustice of a failing capitalist order.

Western ruling establishments are only stoking even more popular uprising by refusing to take the societal malaise seriously. They are postponing a day of reckoning which will come sooner or later with greater force. Blaming Russia is part of their futile charade to postpone the day of reckoning. Telling French people they are being manipulated by Kremlin agents is laughable, contemptible and fueling the calamity of political collapse. Out of collapse, it may be hoped that some progressive, democratic new polity might emerge.

In an absurdist twist of the Marie Antoinette fable, French and Western authorities are saying, “The people want bread – but the Russians are telling them they should eat cake”. The travesty of their own elitist irrelevance is what’s making Western societies revolt against their establishments.