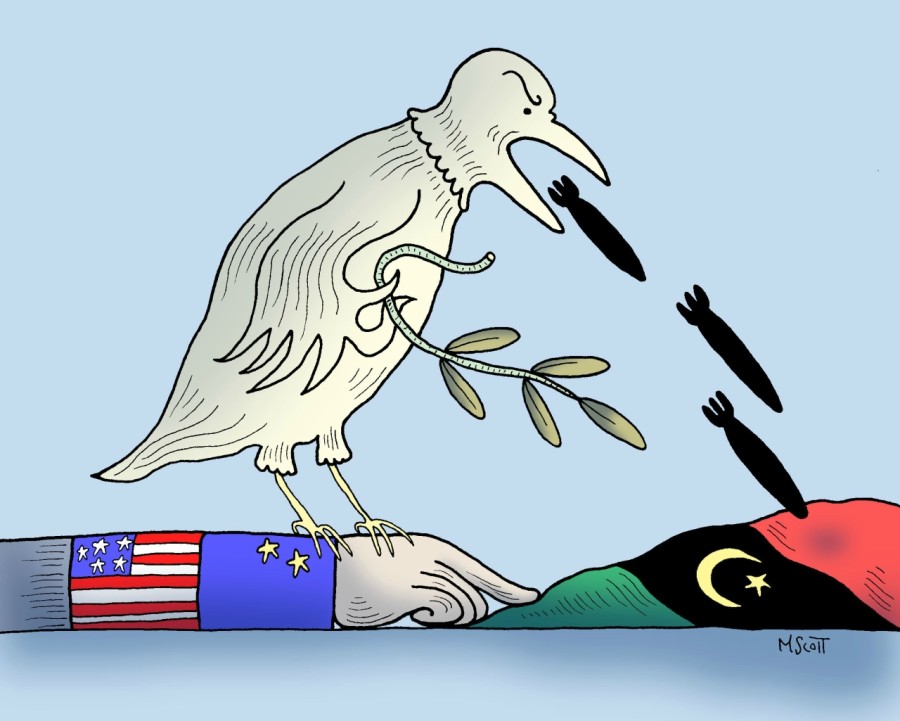 | 05.08.2016 | OPINION
The US air strikes on Libya this week mark a major escalation of American overseas military operations. A Pentagon spokesman said,the air campaign would continue indefinitely in support of the UN-backed unity government in Tripoli against Islamic State (IS) jihadists.

It was the first “sustained” aerial intervention in Libya since 2011 when US and other NATO warplanes conducted a seven-month bombing campaign in order to oust the government of Muammar Gaddafi.

The timing of the latest US air strikes on the Libyan port city of Sirte seems significant. For nearly two months, the Tripoli-based government has been making inroads against the IS brigades in Sirte. So why should US air strikes be called in at this precise juncture?

The deployment of US air power in Libya followed within days of the decisive offensive launched by the Syrian Arab Army and its Russian allies on the strategic city of Aleppo in northern Syria. As the Syrian and Russian allies move towards defeating anti-government militias holed up in Syria’s biggest city that victory portends the end of the five-year Syrian war.

Frustration in Washington over Russia’s successful prosecution of its war against foreign-backed terror groups in Syria has been palpable since Russian President Vladimir Putin ordered in his forces to the Arab country – a longtime ally of Moscow – nearly ten months ago.

American frustration reached boiling point when Russia unilaterally announced last week that it was proceeding, along with Syrian forces, to take back the city of Aleppo. Syria’s second city after the capital Damascus has been besieged by illegally armed groups for nearly four years. With its proximity to the border with Turkey, Aleppo has been a crucial conduit for foreign fighters and weapons fueling the entire war – a war that Washington and its NATO allies and regional partners have covertly sponsored for their political objective of regime change against President Bashar al-Assad.

When Russia’s Defense Minister Sergei Shoigu announced that humanitarian corridors were being opened around Aleppo for fleeing civilians and surrendering fighters, the plan was mocked as a “ruse” by US Secretary of State John Kerry. The US ambassador to the United Nations Samantha Power described the Syrian-Russian offensive on Aleppo as “chilling”.

However, the sovereign, elected government of Syria has every right to take back control of Aleppo – formerly the country’s commercial hub – which had been commandeered by an assortment of illegally armed groups, some of whom are designated as internationally proscribed terror organizations.

What the pejorative words of Kerry and Power indicate is Washington’s perplexity at Moscow’s success in Syria. Russia’s military intervention has thwarted the US-led foreign conspiracy for regime change. Washington may have got away partially with regime-change schemes in Afghanistan, Iraq, Libya and Ukraine. But Russia’s intervention has put paid to a similar maneuver in Syria.

Not only that, but as Russia and its Syrian ally close in for a final defeat of the anti-government mercenary networks in Aleppo, it is becoming excruciatingly obvious that Washington’s charade of “moderate rebels” mingling among terrorists is also exposed. For months now, Washington has procrastinated on Moscow’s demands that it provide clear demarcation between so-called moderates and extremists. Washington has studiously balked at providing any distinction or physical separation. As Russian and Syrian forces corner the militants in Aleppo, it becomes evident that Washington and the Western media are caught on a damnable lie, which has been used for the past five years to justify the war in Syria. Furthermore, Russia emerges vindicated in the way it has prosecuted its military campaign in support of the Syrian government.

In other words, Russia is seen as genuinely fighting a war against terrorism, whereas Washington and its allies are evinced as having a mercurial, if not criminal, relationship with terror groups that they claim to be combating.

On Friday, Washington’s top diplomat John Kerry was anxiously waiting for clarification from Moscow on what the Aleppo offensive was about. By Monday, it was clear that Moscow was not going to pander to Washington’s apprehensions about the offensive plan.

“Once again, the Obama administration appears to have been blindsided by Mr Putin, just as it was when Russia dispatched its forces to Syria in September,” declared an editorial in the Washington Post on Tuesday.

It was on Monday-Tuesday night that US air strikes were ordered on Libya.

Washington’s chagrin over Syria is compounded because only a few weeks ago, Kerry flew to Moscow to offer a “deal” on joint military cooperation between the US and Russia, allegedly to fight terrorist brigades in Syria. It transpired that what the American deal was really all about was to inveigle Russia’s concession for Assad to stand down. That is, for Russia to acquiesce to the American goal of regime change.

Russia was having none of it. Russian Foreign Minister Sergey Lavrov reiterated the position that the future of Syria’s presidency was a matter for the Syrian people to determine alone, without any external interference.

Then the military offensive embarked on Aleppo by Syrian and Russian forces – without regard to Washington’s concerns for its “moderate rebels”/terror assets – was a further sign that Moscow was following its own strategic assessment and objectives. To Washington that was a stinging snub.

The Washington Post editorial cited above carried the peeved headline: “Stop trusting Putin on Syria”. It was but the latest in a series of tetchy editorials admonishing the Obama administration for “caving in” to Moscow over Syria. One such earlier headline ran: “Obama retreats from Putin in Syria – again”.

Within the Obama administration there appears to be sharp dissent over its perceived failing policy on Syria. The Defense Secretary Ashton Carter and National Intelligence Director James Clapper were opposed to Obama and Kerry’s now-redundant gambit to enlist Russia’s military cooperation.

Earlier, a list of 51 US diplomats signed a joint letter calling on the Obama administration to step up its military operations in Syria against the Assad government. It is also clear that Obama’s would-be Democrat successor in the White House, Hillary Clinton, is surrounded by Pentagon aides pushing for greater American intervention in Syria – even though that poses a grave risk of confrontation with Russian forces.

Facing mounting criticism for failure in Syria, it seems that the US air strikes on Libya were ordered as some kind of compensation. President Obama reportedly ordered the strikes on the advice of Pentagon chief Ashton Carter. It looks like the Obama administration is trying to fend off accusations of being soft.

Secondly, by ordering air strikes against Islamic State jihadists in Libya’s Sirte, that allows Washington to regain the narrative which it has lost to Russia in Syria.

Russia’s success in Syria has seriously undermined Washington’s claims of waging a war on terror. The last stand of the terror groups in Aleppo – including militia supported by Washington and its allies – represents an incriminating moment of truth.

Hence, as the net tightens on Syria’s Aleppo, Washington’s hand was forced to lash out in Libya, in an attempt to burnish its tarnished claim that it is fighting against Islamist terrorism.

In truth, however, the bigger net seems to be tightening on Washington. World public opinion increasingly understands that terrorism is closely correlated with everywhere Washington engages. The terrorism spawned in Afghanistan and Iraq under US occupation, was grafted onto Libya during NATO’s regime-change bombing operation in 2011, which in turn contaminated Syria as part of another regime-change campaign under Obama and his then Secretary of State Hillary Clinton.

For Obama to now revisit Libya with further air strikes due to failure of a criminal policy in Syria – a failure resulting from Russia’s principled intervention – is simply plumbing the depths of American degeneracy. And the rest of the world can see it.

No More Brainwashing Into Fascism* and War!