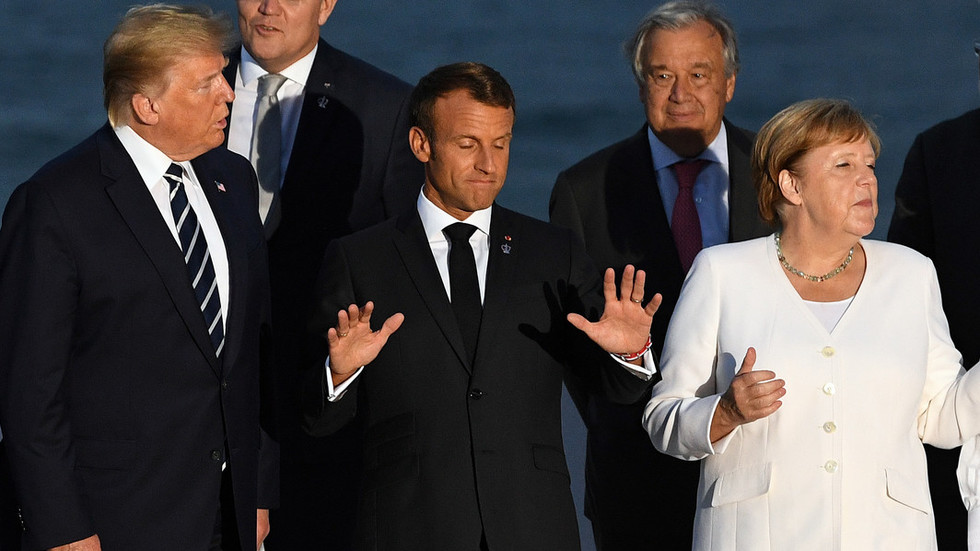 The psychological condition known as Stockholm Syndrome, in which hostages irrationally sympathize with their captors, could well be applied to European leaders when it comes to US bullying.

The US has always been the dominant –and domineering– party in the transatlantic relationship. But past administrations in Washington have been careful to indulge European states as “partners” in a seemingly mutual alliance.

Under President Donald Trump, the Europeans are pushed around and hectored in a way that shows their true status as mere vassals to Washington.

Take the Nord Stream 2 project. The 1,220-kilometer-long undersea pipeline, which will significantly increase delivery of gas to Europe, is due to be completed by year’s end. The new supply stands to benefit the European Union’s economy, in particular Germany’s, by providing cheaper energy fuel to drive businesses and heat homes.

Yet last week, US Senator Ted Cruz threatened that his country “has the ability to halt” the entire project being completed. Cruz is on the Senate Foreign Relations Committee which in July passed a bill that will impose sanctions on companies involved in the construction of the pipeline. Germany, Austria, France and Britain are part of the building consortium, along with Russia’s Gazprom.

ALSO ON RT.COMUS Senate committee green-lights sanctions against Nord Stream 2 pipeline projectIronically, the Senate bill is called ‘Protecting Europe’s Energy Security’. It’s a curious form of ‘protection’ when US-threatened sanctions will deprive European businesses and consumers of affordable gas. Cruz, as with President Trump, has accused Russia of trying to tighten its economic grip on Europe. Closer to the truth, and more cynically, Washington wants Europe to buy its more expensive liquefied natural gas. Texas, the biggest source of US gas, is Cruz’s home state. Maybe his bill should be renamed ‘Protecting American Energy Exports.’

Related to that is the wider imposition of sanctions by Washington and Europe against Russia since 2014. Several reasons are cited for the punitive measures on Moscow, including alleged destabilization of Ukraine and the ‘annexation’ of Crimea, alleged interference in elections, and the dubious Skripal poisoning affair. The sanctions policy has largely been promoted by Washington, with Europe dutifully following.

The lack of any European pushback to such blatant American interference in its supposed sovereignty and independence on matters of vital interest is simply astounding.

ALSO ON RT.COMIndia begins sending Russia money for S-400s despite pressure from USAnother glaring example is the way the Trump administration is insisting that European states abandon major investment plans with the Chinese telecoms firm Huawei to modernize mobile phone and internet infrastructures. Washington hasthreatened reprisal sanctions if Europe goes ahead in partnering with Huawei. The US has also warned that it may withhold “intelligence sharing” from European “allies” on security and terror risks. How’s that for a ‘friend’?

Again, there is the same pattern of mealymouthed acquiescence from European leaders, instead of a robust censure to the US to mind its own business.

The international JCPOA nuclear accord with Iran is another crowning demonstration of the fundamentally abusive relationship Washington has with Europe. This week, the Trump administration poured cold water on a French proposal to extend a $15 billion credit line to Tehran. The French move was meant to ease economic pressure on Iran and to keep it onboard the faltering nuclear accord.

ALSO ON RT.COM‘Piracy, bribery & blackmail’: Iran slams US sanctions as economic terrorism against civiliansWashington declared that “it will sanction anyone buying Iranian crude oil exports”. There will be no waivers or exceptions to American sanctions. That pretty much tells the European Union to forget about its hesitant efforts to save the Iran nuclear deal, to which it is a signatory, along with Russia and China.

So, because Trump crashed out of the accord, that means the Europeans have to as well, in his domineering view. Evidently, the EU has no freedom to act independently from American diktat. Wrecking relations between Europe and Iran will jeopardize economic interests and security concerns over conflict and non-proliferation of weapons in the region. Are European concerns so irrelevant to Washington?

Now steel yourself for the following stupendous double-think. US Secretary of Defense Mark Esper last week lectured European “friends” to be more vigilant in fending off alleged Russian and Chinese malignancy.

Speaking at the Royal United Services Institute think tank in London, it was billed as a showpiece address, Esper’s first major speech since becoming Pentagon chief in July.

“It is increasingly clear that Russia and China want to disrupt the international order by gaining a veto over other nations’ economic, diplomatic, and security decisions,” he said.

“To put it simply, Russia’s foreign policy continues to disregard international norms,” added the former lobbyist for Raytheon and other American weapons manufacturers, without a hint of shame.

Europe’s response? Did European leaders and media laugh uncontrollably at such patent absurdity, hypocrisy and vice-projection? Were there stern official statements or editorials telling the American representative for the military-industrial complex to not insult ordinary intelligence?

ALSO ON RT.COMMacron knows for Europeans the ‘problem’ country is not Russia but US (by George Galloway)Europe’s tolerance for abuse by its American ‘partner’ really does invoke a Stockholm Syndrome problem. Sure, sometimes the European leaders like Merkel or Macron snivel about the need to be more independent from Washington, but when the chips are down, they all show a contemptible toadying to American policy even when it is actually damaging to their own national interests.

When Trump recommended that Russia be admitted to the Group of Seven economic powers at last month’s summit in France, the rest of the group reacted in horror, demanding Moscow’s exclusion. How twisted is that? The pathetic European leaders want to stay in a club with their biggest tormentor – Washington – while shutting out a country which is a neighbor and a potentially important strategic partner. How irrational can you get?

Psychologists explain Stockholm Syndrome as a “coping mechanism” to deal with trauma. It is observed among hostages, prisoners of war, survivors of concentration camps, slaves and prostitutes. Irrational sympathy with a party that actually inflicts hardship and injury is a way to minimize trauma by seeming to adopt the same values.

Apparently, the syndrome can be treated for recovery. Victims have to gradually be introduced to the objective truth of their situation. Europe needs to wake up from delusions about its American ‘ally.’

The statements, views and opinions expressed in this column are solely those of the author and do not necessarily represent those of RT

Tangled Tale of NATO Expansion at the Heart of Ukraine Crisis by Joe Lauria, Consortium News