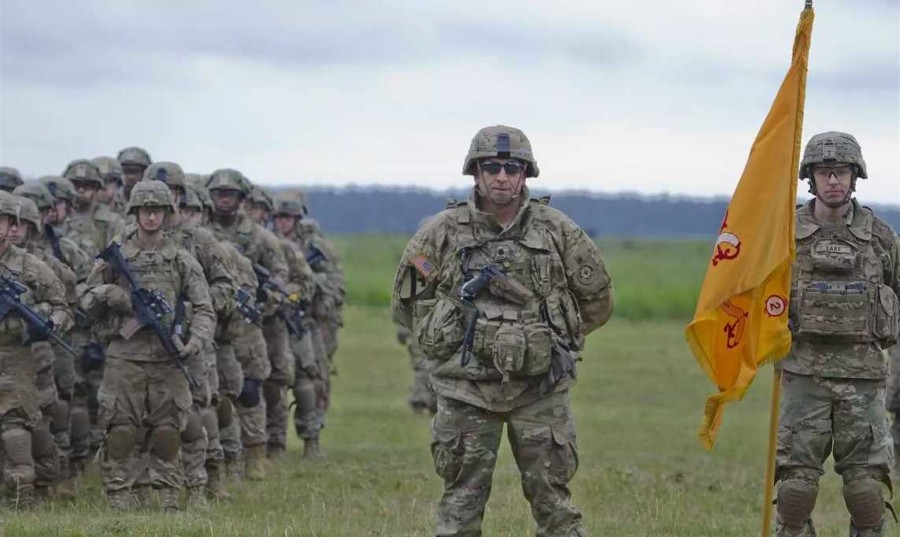 In the past, the North Atlantic Treaty Organization (NATO) justified its militarization of large swaths of Eastern Europe by pointing to the omnipresent threat of terrorism, or some ‚rogue‘ foreign state, inherently understood to be Iran. Today the mask has slipped and it is no longer denied that NATO’s primary target is Russia.

But first, a trip down nightmare lane. The road to ruin – at least as far as US-Russia relations were concerned – began immediately following the 9/11 terror attacks. Three months after that fateful day, in December 2001, George W. Bush informed Vladimir Putin that the US was withdrawing from the Anti-Ballistic Missile Treaty, a strange move considering that the treaty had kept the peace between the nuclear superpowers since 1972. This geopolitical „mistake,“ as Putin rightly defined it, allowed the US to begin the process of deploying a missile defense system, smack on the border with Russia, allegedly to shield the continent against an attack by Iran. Never mind the fact that Tehran had absolutely no reason, not to mention the wherewithal, to carry out such a suicidal mission. But Washington has never been one to let facts get in the way of a forced move on the global chess board.

Thus, the Bush administration advocated on behalf of a land-based missile defense system with interceptors based in Poland and a radar station in the Czech Republic. However, due to serious objections from Russia, not to mention the apprehensive citizens of the host countries, the plan had reached an impasse in 2008 – just as Obama was replacing Bush in the White House. Some would call that impeccable timing. What happened next can only be described as a devious sleight of hand on the part of Washington.

In September 2009, the Nobel Peace Prize winner, Barack Obama, announced to great fanfare that the US would „shelve“ the Bush plan. This announcement was received in Moscow and beyond as a sign that America’s first black president was truly the real deal when it came to working on behalf of global peace. Suddenly, it appeared that the Bush reign of error had been an ugly anomaly, a bad eight-year dream. That grand illusion lasted for about as long as it took to read that sentence.

Barack Obama, the man who had seduced the global masses with his velvety albeit telepromoted delivery, shifted gears the very next day, announcing that the US would be deploying, in four phases, sea-based SM-3 interceptor missiles in Eastern Europe instead. An opinion piece in the New York Times, penned by then Secretary of Defense Robert M. Gates, provided all the information to understand that the world had been hoodwinked.

„Steady technological advances in our missile defense program — from kill vehicles to the abilities to network radars and sensors — give us confidence in this plan,“ Gates wrote. „The SM-3 has had eight successful tests since 2007, and we will continue to develop it to give it the capacity to intercept long-range missiles like ICBMs. It is now more than able to deal with the threat from multiple short- and medium-range missiles — a very real threat to our allies and some 80,000 American troops based in Europe that was not addressed by the previous plan.“

„We are strengthening — not scrapping — missile defense in Europe,“ he concluded.

With the benefit of hindsight and common sense, it seems that Washington’s plan from the start was to move forward with the sophisticated SM-3 system; the bulky Bush initiative just provided the necessary distraction to usher in the advanced Obama plan, which presents a major threat to the global strategic balance.

But all that is ancient history compared to what is happening today. Under the guise of ‚Russia aggression,‘ a concept that was peddled to the unsuspecting masses based on the fake news of a Russian ‚invasion‘ of Ukraine and Crimea, compounded by claims that Russia somehow swayed the 2016 US presidential elections, US-led NATO has dropped all pretensions and declared open season on Russia. Combined with Donald Trump’s empty threat that the US would exit NATO if member states did not start spending more on defense (2 percent of annula GDP), Eastern Europe has become a veritable hothouse of paranoia-driven militarization.

In what the Kremlin has described as the greatest amassing of military assets on its border since World War II, NATO troops and hardware have set up camp from as far north as Estonia, down through Latvia and Lithuania, into Romania and Poland, where the rotation of US troops is now standard operating procedure.

He then went on to make a rather unsettling yet accurate observation: „Today’s mantra regarding ‚Russian aggression‘ is the 2003 equivalent of ‚Saddam’s Weapons of Mass Destruction,‘ to be repeated ad nauseum by anyone supporting NATO’s Drang nach Osten. And like the WMD claim, it’s based on zero evidence.“

Such reckless behavior would have been difficult to fathom less than a decade ago.

But these are brave new times, and American madness has settled upon the realm of foreign relations like a noxious cloud, forcing client states to crack open their tattered wallets or be left out in the cold when the big, bad Russian bear comes a knocking.

Consider the case of Romania, one of Europe’s poorest countries. Prompted by Donald Trump’s warning that North Atlantic Treaty Organization (NATO) members must fork over 2 percent of their GDP on military spending, Bucharest just made a down payment on a $1 billion American-made M142 HIMARS (High Mobility Artillery Rocket System), as well as four new multi-function corvettes.

Romanian Defence Minister Mihai Fifor told Jane’s that these exorbitant purchases would “improve Romania’s national and allied defense capability” and emphasized that Romania’s commitment to the 2% of GDP spending cap “for the next 10 years is strong”.

Prime Minister Viorica Dancila said, “We want those procurement programs to also strengthen our defence industry based on offset arrangements where possible”.

This was not the first American military incursion into Romania under the guise of guarding against Iran and other alleged rogue players.

In May 2016, the US activated its $800 million missile shield in Romania, which Russia obviously views as a direct threat.

“At the moment the interceptor missiles installed have a range of 500 kilometers, soon this will go up to 1000 kilometers, and worse than that, they can be rearmed with 2400km-range offensive missiles even today, and it can be done by simply switching the software, so that even the Romanians themselves won’t know,” Vladimir Putin told reporters during a visit to Greece in May 2016.

“We have been saying since the early 2000s that we will have to react somehow to your moves to undermine international security. No one is listening to us,” Putin warned.

It remains to be seen how long NATO tone deafness will continue before the militarization of Eastern Europe gets completely out of control and the situation becomes untenable. Or perhaps the point of no return has already come to pass and, fait accompli, we are merely enjoying an illusory calm before the storm.