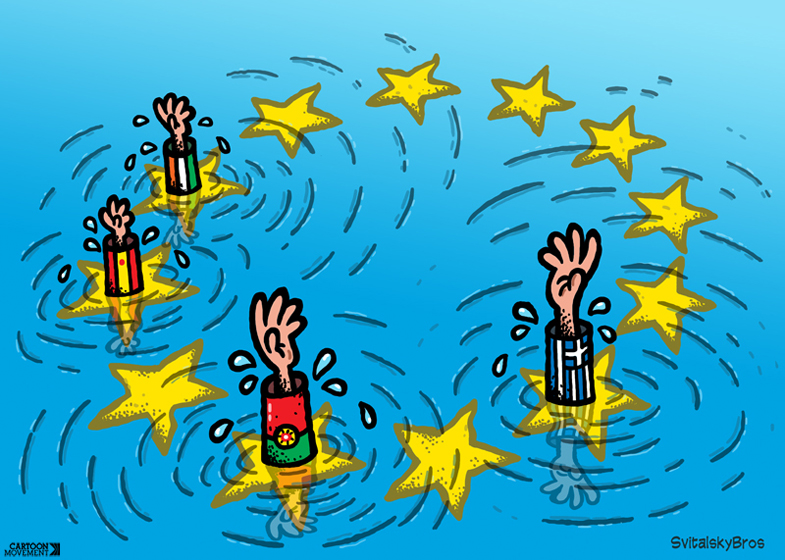 The influx of refugees from the Middle East and North Africa, as well as the chronic financial instability of a number of EU member states, is just the tip of the iceberg that looms ominously in Europe’s path. In fact, the foundations of the edifice of the European Union are being simultaneously undermined by several interrelated crisis.

To a large extent the enthusiasm generated by the creation of a single European realm evaporated once it became clear that the primary beneficiaries of this «united Europe» were Germany and France. The system for decision-making within the European Union (European Commission members are not elected via direct vote) makes it very unlikely that small countries can resist the pressure of the EU bureaucracy. This deepens the mistrust toward supranational institutions even if they lack authoritative functions.

The interests of individual countries within the EU often conflict with and contradict each other. Thus, Germany for example stubbornly blocks the formation of the Mediterranean Union, although it has long been sought by France. In recent months, a new tangle of contradictions has emerged, caused by the different approaches taken by European countries to protect their borders from the influx of illegal migrants. In many ways, although the EU’s common foreign policy is constantly being proclaimed, it is at the same time chimerical. The crisis of the «transatlantic» economy

The Transatlantic Trade and Investment Partnership (TTIP), for which Washington is lobbying hard, represents a special kind of threat to the EU. The report, «The Trans-Atlantic Trade and Investment Partnership: European Disintegration, Unemployment and Instability», published in October 2014 by the Global Development and Environment Institute, analyzes the biggest repercussions of the TTIP agreement: – The agreement would lead to net losses in terms of European net exports after the first decade. Northern European economies would suffer the most (2.07% of GDP) followed by France (1.9%), Germany (1.14%), and the United Kingdom (0.95%).

– The agreement would lead to net losses in terms of GDP. Consistent with figures for net exports, Northern European economies would suffer the largest decline in GDP (-0.50%), followed by France (-0.48%) and Germany (-0.29%).

– The agreement would lead to a loss of government revenue. France would suffer the most (0.64% of GDP). Government deficits would also increase as a percentage of GDP in every EU country, pushing public finances closer to or beyond the Maastricht limits (3%).

– The agreement would lead to higher financial instability and the accumulation of imbalances, resulting in a decrease in export revenues, wage shares, and government revenues.

The crisis of European culture

One common manifestation of the crisis of European culture has been the refusal of supranational organizations to acknowledge the Christian underpinnings of European civilization and also the failure of the globalist venture to build a «multicultural» society on European soil. Arabs, Turks, and other groups of migrants from the East not only remain unintegrated into European society, but also threaten to radically undermine the foundations of Europeans’ lives by creating alien enclaves within that society. Razor wire walls erected on the borders of individual states cannot fence off this threat. Although it is not yet readily apparent, the cultural-historical and anthropological character of the European peoples is now being called into question.

The crisis of family and marriage

Attempts to sow «transhumanist» utopias, plus the legalization of prostitution and unnatural forms of cohabitation under the guise of same-sex partnerships and «marriages», has become a mechanism for the historical and cultural destruction of the European family institution.

The crisis of the military and political mechanism of the EU

In addition to the debates about the role of NATO, the prospect of member states increasing their military spending to as much as 2% of their GDP, and the creation of European military response forces, disagreement has also emerged within the EU over its very strategy for the future.

It should be noted that the EU’s various civil and military missions are for the most part taking place far from the borders of the European Union: in Afghanistan, Djibouti, Somalia, the Seychelles, Tanzania, the Democratic Republic of Congo, Mali, Niger, Central African Republic, Palestine, Kosovo, Bosnia, Georgia, and Ukraine.

On March 27th, 2015, Council Decision 2015/528 was approved, which contained 49 articles and two appendices detailing the financing, compensating, and reporting procedures in place during the preparation and implementation of such missions. This cumbersome bureaucratic document (code named Athena) has been criticized by the European public for being out of touch with reality. Critics claim the imbalance between the desires and capabilities of the EU illustrates the crisis of the military-political mechanism of the European Union. The crisis of good neighborly relations.

The EU’s neighborhood policy has a long history. Officially, it aims to create friendly buffer zones in Eastern Europe, North Africa, the Middle East, and the South Caucasus. But in fact, some of those projects have become a tool for political expansion (such as the Eastern Partnership and Southern Partnership). Usually, the EU enters into an association agreement in exchange for a pledge to implement reforms. As a result, the associated state may receive duty-free access to certain EU markets or to financial or technical assistance. However, the official data found in the European Neighbourhood Policy Countries report published by The European Commission shows that it is the EU that always reaps the benefits of these agreements, rather than its partners in the East. Deeper analysis of EU actions toward the states that are part of both of these «partnerships» (the «Eastern» and «Southern») shows that in fact these projects are actually more of a neocolonialism in disguise. And in some countries (Moldova and Ukraine), European subsidies under the Eastern Partnership program were simply dissolved in the ocean of corruption.

The migration crisis as a crisis of EU solidarity

The foundations for the critical stage of this crisis were laid during the spring and summer of 2014. The European Commission has not found a satisfactory, effective solution to the problems created by the influx of refugees from the East. And they will not find one, given that at the heart of this crisis lies the widespread regional destabilization of the Middle East and North Africa set in motion by the United States and its NATO allies. In this context, the «united» show of discipline within «unified Europe» is weakening, and some countries – dissatisfied with the refugee quotas imposed upon them – have begun to act independently and without regard for Brussels, based on their own understanding of their national and state interests.

The crisis of energy strategy

The European Union’s Third Energy Package, which sets limits on the ways in which Russian gas can be imported into Europe, is increasingly coming into conflict with the interests of individual EU member states, especially those that are experiencing a shortage of their own domestic energy resources. A report on energy policy from the German Institute for International and Security Affairs states that «[t]he energy union discourse [the European Energy Union is yet another supranational structure being created by Brussels – LS] should thus be interpreted mainly as a symptom of an EU integration crisis». This is very true, because the idea behind the creation of the European Energy Union is to impose strict conditions on cooperation between energy suppliers and to completely deprive the national governments of EU member states of the opportunity to pursue an independent energy policy. There can be no doubt that such attempts will only undermine unanimity within the EU. As demonstrated by the September 4, 2015 signing of the shareholder agreement between Gazprom and five European energy companies (Germany’s E.ON and BASF / Wintershall, Royal Dutch Shell, Austria’s OMV, and ENGIE of France) regarding the construction of the Nord Stream-2 pipeline under the Baltic Sea that will deliver gas to Germany and beyond, a noticeable crack has already developed in the relations between the European Union’s supranational structures of governance and major European businesses.
Tags: European Union Germany Middle East Russia