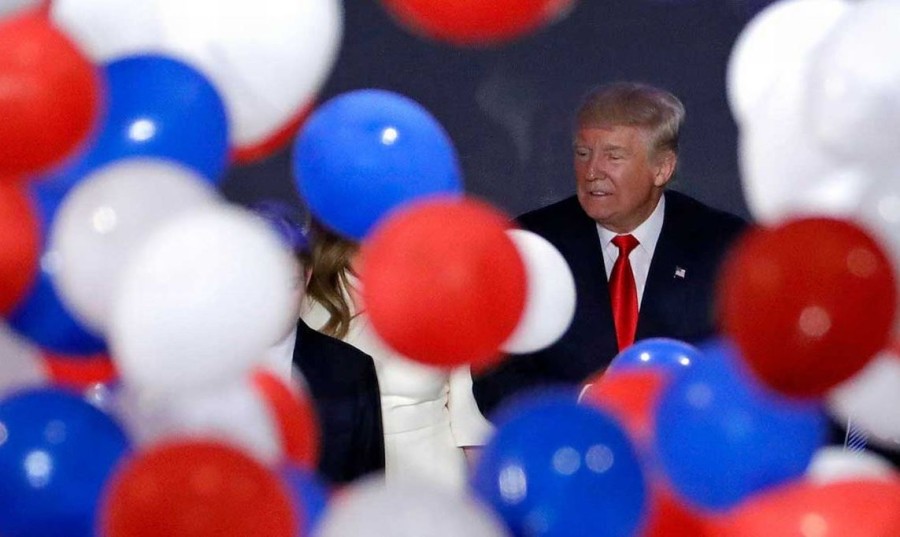 | 10.11.2016 | WORLD
Donald Trump’s Victory: Prospects for Russia-US Relations
Opportunities should not be squandered. It is especially important at a time when the overall political relationship between Washington and Moscow has tumbled to a nadir. Donald Trump’s victory and the expected drastic changes in the US foreign policy open up new prospects for the improvement of bilateral relations.

It is useless to make predictions without the new president announcing who his foreign policy advisers will be. But it is possible to define in general terms what could and should be done to change the tide.

With arms control and non-proliferation in doldrums, the tensions over Ukraine, the standoff between Russia and NATO and the failure to cooperate efficiently in Syria, the mission seems to be more of a tall order, but it would be a great mistake to waste time.

The next president needs to accept that Moscow cannot simply be defeated or contained but it can be engaged through a comprehensive balance of cooperation and competition. Mr. Trump is savvy when it comes to economy but in order to tackle the relationship with Russia he’ll have to go outside of his comfort zone as the divisions are mainly related to security issues. However, his business experience resulting in pragmatic and business-like approach to foreign policy issues may be just exactly what is required to mark a new page in the Russia-US relationship.

Steps to prevent backsliding on nuclear disarmament must be taken during the Donald Trump’s tenure. This is a key issue to shape the global nuclear security landscape. Setting aside the existing differences over other issues to take the bull by the horn and achieve progress on strategic nuclear arms control regime is the only way to go about it.

The problem is aggravated by the fact that Russia and the US have not had meaningful negotiations on this issue for almost three years, much like it was in the days of the Cold War when there were no contacts to discuss it in the period from 1983 to 1985.

Currently, the New Strategic Arms Reduction Treaty (New START) is in force. The treaty expires in February 2021, just three years after the parties are required to complete reductions in 2018. It can be prolonged for 5 years more if the parties agree. It remains unclear whether the United States and Russia can establish a new arms control regime.

If the two leading nuclear powers slide into a nuclear arms race, it will also adversely affect China’s interests and make it adjust its own nuclear policies – quite a headache for the new US commander-in-chief.

The future of the 1987 Intermediate-range Nuclear Forces (INF) treaty – a landmark Cold War-era agreement – has become a very contentious issue. Time is running out. The INF is a pillar of European security, if it is weakened or discarded, the whole system will collapse. Russia says the Mk 41 vertical launching system for SM-3 missile interceptors based in Romania (and slated for deployment in Poland in 2018) is similar to those on US Navy ships and can launch cruise missiles. This is a flagrant violation of the treaty which bans the use of such launchers. There are other problems related to the compliance with the treaty as both sides blame each other for failure to abide by its provisions. Donald Trump will have to deal with this problem on his watch. For instance, the new administration could offer transparency measures regarding the vertical launch boxes allowing to verify if they really hold interceptors, not cruise missiles.

The agenda of the president-elect includes NATO deployments in Eastern Europe to make Russia consider stationing short-range missiles near its borders that could be used in both nuclear and conventional scenarios. This development would increase Russia’s emphasis on tactical nuclear weapons (TNW), sending the Russia-NATO security relationship into a downward cycle.

The ballistic missile defense (BMD) is a threatening global stability. No progress in other areas is achievable without coming to agreements on the BMD.

To begin with, the new administration could make some steps to make sure that BMD systems do not undermine the Russia’s assured second-strike capability. The interceptors could be located in geographic areas to make impossible interception of Russian intercontinental ballistic missiles (ICBMs). Radars could be redeployed not to provide substantial coverage of Russia. Anyway, the problem is too acute to be shelved. The Donald Trump’s administration will have to deal with it one way or another.

The parties could launch regular discussions of the overall direction of ballistic missile programs, exchange intelligence and review developments assessing the missile threats and the ways to counter them. Transparency is the best confidence building measure. US conventional forward-deployed conventional strike assets with standoff range – boost-glide systems in particular – add to the problem.

It might be sensible to discuss the implications of conventionally armed cruise missiles for the strategic nuclear balance. Hypersonic missiles are very destabilizing weapons that should be covered by appropriate agreements. Some formal limitations would enhance security and mitigate the concerns of Russia, which feels threatened and has to respond.

If the problem of US conventional first strike superiority is not addressed – no agreement of tactical nuclear weapons is possible. Introducing limits is appropriate. The final goal in each and every case should be a formal binding agreement.

Military activities and conventional forces is another burning issue the Trump administration has to grapple with. Germany has recently come up with a proposal to start talks on a new Russia-NATO arms control agreement to comprise regional caps on armaments, transparency measures, rules covering new military technology such as drones, and the ability to control arms even in disputed territories.

Russia and the US could join together to convene a conference, presumably under the auspices of the Organization for Security and Cooperation in Europe with the full involvement of all relevant states.

With all the problems in existence and the proposed way to tackle them, Russia and the US could scope out the issues and agree on how formal negotiations should be conducted.

Exploratory arms control discussions would help establish a useful venue for dialogue on other pressing problems. The agenda could be broadened to regional conflicts, with

Ukraine and Syria discussed as separate issues. Enhancing the forums, like the Organization for Security and Co-operation in Europe (OSCE) and the NATO-Russia Council would be a step in the right direction. Achieving tangible progress on one issue could lead to positive results in other areas.

Donald Trump has said he is ready to ally with Russia in the fight against Islamic State. It could be a good start. The post-war crisis management is a key area where both countries could be allies as they are fighting the same enemy. International cooperation is crucial for success in Syria, Iraq and Libya. Russia and the United States leading the process would become a historic milestone to benefit all.

Cooperation in the Middle East and North Africa would change the Russia-West relationship for the better.

Lifting the anti-Russian sanctions so unpopular among US allies would greatly enhance the prospects for success. «Clearly the chances of sanctions being lifted on Russia have risen substantially», Charles Robertson, Renaissance Capital’s global chief economist, said. «That would improve the investment climate for Russia».

With the sanctions lifted, the parties could apply efforts to improve economic cooperation – the weak point of bilateral relationship. Actually, economy has never been high on the Russia-US agenda. Donald Trump is an experienced businessman, he could spur the process.

The president-elect is the right person to turn the tide in the Russia-US relations because he is independently minded and not tied to Washington’s establishment. He can avoid specific bureaucratic pitfalls and keep neocons and liberal hawks from positions of power something his predecessor has failed to do. As the presidential race has showed, he can see a problem from the other side’s perspective. What if Russia deployed forces and BMD installations near the US borders? He has imagination to understand such things. Donald Trump seems to possess the needed leadership traits to stand up to pressure and do things his way. His election victory is an opportunity not to miss. Normalizing the relations with Russia will be a great foreign policy success – a historic legacy to make him own in history as a great president. source: http://www.strategic-culture.org/news/2016/11/10/donald-trump-victory-prospects-for-russia-us-relations.html