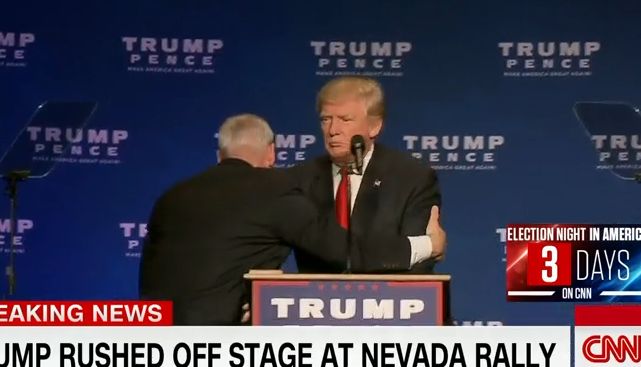 But can he take on the infamous Washington “Blob”?

John J. Mearsheimer is the R. Wendell Harrison Distinguished Service Professor of Political Science at the University of Chicago

There are many reasons to be deeply worried about a Donald Trump presidency. But if he makes the right choices, he could fundamentally alter U.S. foreign policy for the better.

Trump campaigned against America’s powerful foreign policy community—what one of President Obama’s advisors derisively labeled “the Blob.” Its members include prominent Democrats and Republicans with similar views on foreign policy. He accused them of producing “one foreign policy disaster after another,” and promised to “develop a new foreign policy direction for our country.” This was precisely the message many voters wanted to hear, and the president-elect now has the opportunity to change how the United States deploys its power around the world.

Over the past twenty-five years, American leaders have pursued a policy of liberal hegemony, which calls for the United States to dominate the entire globe. This strategy assumes every region of the world matters greatly for American security, and it calls for extending the U.S. security umbrella to nearly any country that wants protection as well as trying to spread democracy far and wide. In practice, this objective means toppling regimes and then doing nation building. Small wonder the United States has been at war for two out of every three years since the Cold War ended.
Liberal hegemony is a bankrupt strategy. The United States has worked to topple regimes and promote democracy in six countries in the greater Middle East: Afghanistan, Egypt, Iraq, Libya, Syria and Yemen. Each attempt has been an abject failure: wars are raging in every one of those countries except Egypt, which is once again a military dictatorship. This campaign has also made America’s terrorism problem worse: Al Qaeda has morphed and multiplied, and we are now at war with ISIS, which is largely a consequence of the U.S. invasion and occupation of Iraq.

In Europe, the United States foolishly tried to integrate Georgia and Ukraine into the West, precipitating an unnecessary crisis with Russia that upset the peace in eastern Europe and made it harder for Moscow and Washington to cooperate on other matters, like ending the bloodletting in Syria.

Spreading democracy, especially by force, almost always fails. It inevitably involves large-scale social engineering in societies that most Americans poorly understand. Dismantling and then replacing existing political institutions inevitably creates winners and losers, and the latter usually take up arms in opposition, which forces the U.S. military to wage costly counterinsurgency campaigns that are extremely difficult to win. The end result is precisely the sort of quagmire we faced in Afghanistan and Iraq.
The Trump administration should abandon liberal hegemony and adopt a realist foreign policy. Realism is chiefly concerned with America’s position in the global balance of power, and it shuns doing social engineering inside other countries. Instead, Washington would respect the sovereignty of other states even when it disagrees with their internal policies. Americans prize their own sovereignty, which is why they recoiled at the idea that Russia might be interfering in the recent presidential election. The United States should treat other countries according to the same standard and respect their sovereignty as well.

Instead of trying to garrison the world and spread democracy, the Trump administration should concentrate on maintaining the balance of power in the three regions that are vital to U.S. security: Europe, East Asia and the Persian Gulf.

East Asia and Europe are important because they are the key centers of wealth and have long been home to the world’s other great powers. The Persian Gulf is a core strategic interest, because it produces about 30 percent of the world’s oil, which is a critical resource for the functioning of the global economy. America’s main goal in each of these regions should be to prevent the rise of a regional hegemon.

The good news is that no country is strong enough to dominate Europe or the Gulf for the foreseeable future. Germany’s power will decline over time, mainly because of its shrinking population, while Russia has similar demographic problems and an economy that is too dependent on gas and oil revenues. Even if Russia modernizes its economy and its population grows in the years ahead—big ifs—it will still be unable to project significant military power beyond eastern Europe. And even then, the Europeans themselves can afford to build the military forces necessary to check Moscow’s ambitions. Thus, the Trump administration should encourage the Europeans to take responsibility for their own security, while gradually reducing the remaining U.S. troops there.

Trump should also make a concerted effort to improve relations with Russia, which is not a serious threat to American interests. Indeed, the two countries should be allies, as they have a common interest in combatting terrorism, ending the Syrian conflict and keeping Iran (and other countries) from acquiring nuclear weapons. Most importantly, the United States needs Russia to help contain a rising China. Given the history of competition between Russia and China, and the long border they share, Moscow is likely to join in this effort once Washington abandons the misguided foreign policy that has driven it closer to Beijing.

There is also no looming threat to dominate the Gulf, which means the new administration should move most of America’s military forces out of that region and station them over the horizon. The United States would monitor the regional balance of power from afar, but only reintroduce troops in the event a potential hegemon appeared on the scene. This policy of offshore balancing, coupled with quitting the regime-change business, would also ameliorate America’s terrorism problem, which is fueled in part by the U.S. military presence on Arab territory as well as the endless wars the United States has waged in the greater Middle East.

The Trump administration should let local powers deal with ISIS and limit its efforts to providing intelligence, training and arms. ISIS is a serious threat to them but a minor problem for America, and the only long-term solution is building better local institutions, something the United States cannot provide. Regarding Syria, Washington should let Moscow take the lead in shutting down that conflict, which means helping the Assad government reestablish control over most of the country. A Syria run by Assad poses no threat to the United States; indeed, both Democratic and Republican presidents have long experience dealing with the Assad regime. If the civil war continues it will be largely Moscow’s problem.

The new president should also work to improve relations with Iran. It is not in the U.S. interest for Iran to abandon, or not renew, the nuclear deal it recently struck and race to acquire a bomb. Tehran is more likely to take that step if it fears an American attack. After all, nuclear weapons are the ultimate deterrent. Therefore, the United States should seek to mend fences with Iran to take away its main incentive for acquiring nuclear weapons.

There is bad news, however, and it concerns East Asia. If China continues its impressive rise, it is likely to try to dominate Asia the way the United States dominates the Western Hemisphere. The Trump administration must go to great lengths to prevent China from becoming a regional hegemon.

Ideally, Washington would rely on countries in Asia to contain China, but that strategy will not work. Not only is China likely to be far more powerful than its neighbors, but also they are located far from each other, making it difficult for them to form an effective balancing coalition. The United States will have to coordinate these efforts and throw its considerable weight behind them. American leadership is indispensable for dealing with an increasingly powerful China.

The fact that no country threatens to dominate either Europe or the Gulf is a blessing, as it not only allows Washington to concentrate its military forces in Asia, but also allows American policymakers to concentrate their strategic thinking on how to prevent China from becoming a peer competitor. That mission should be of paramount importance for the United States in the years ahead.
Unfortunately, it is not clear whether the Trump administration will be able to adopt the realist strategy described above. The foreign-policy community, which has deep roots and cuts across both of the major political parties, will go to enormous lengths to tame the new president and make sure he sticks with liberal hegemony.

Should it prevail, there will be more terrorism, more failed attempts to spread democracy, more lost wars, and more death and destruction across the greater Middle East. And most importantly, it will be difficult for the United States to concentrate on containing China, mainly because liberal hegemony sets no priorities. It calls for the American military to be everywhere. Let us hope Trump is able to defeat the Blob once he is in the White House, as easily as he did in the campaign.