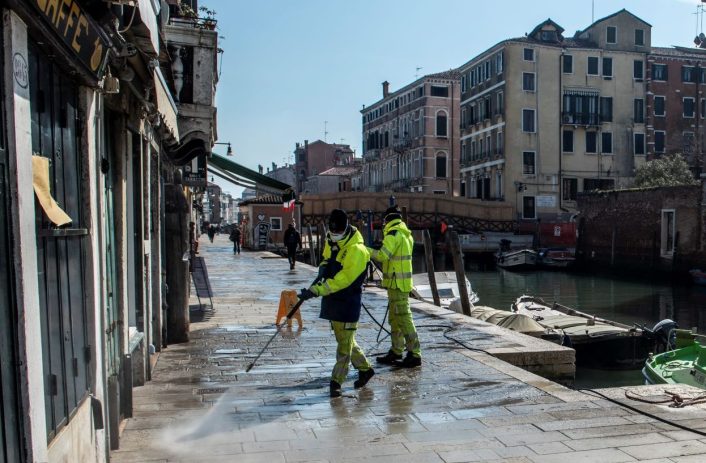 As the EU and US lock down, stifling freedoms and commerce, they overlook how a fellow democracy successfully countered Covid-19
By ANDREW SALMONMARCH 18, 2020

Remarkable and frightening events are underway across Europe and the United States.

Under the banner of novel coronavirus control, democracies are restricting basic freedoms – of movement, of association, of worship. They are enforcing local or nationwide curfews and lockdowns that will inevitably have a ruinous economic impact – especially for small businesses that need cash flow. In the “borderless” EU, borders are suddenly back, and the EU is announcing a 30-day ban on outsiders’ entry.

These steps are unprecedented in peacetime – and draconian. While Covid-19 is a highly infectious but low-mortality illness, many governments are benchmarking their responses on the very worst outbreaks – China’s Wuhan and Northern Italy.

Meanwhile, worst-case scenarios are being routinely bandied about by experts and regurgitated by politicians, panicking the public. Could there be another way to bring the virus under control – without lockdowns or travel bans?

The EU and US are instigating extreme and frankly authoritarian measures while overlooking the experience of a fellow democracy that was, until last week, the second most infected country on earth.

That country, which has now slid down to fifth place on infection charts behind China, Italy, Iran and Spain, provides an exemplary record of pandemic control without trampling over basic liberties and commerce.

It has seen its numbers of new infections slip from the high hundreds last week to double digits all this week. Moreover, it has probably the lowest mortality percentage – 0.7% – among all countries that have suffered significant outbreaks of Covid-19.It has managed these outcomes without locking down even its most affected city. While taking sensible precautions, it has not stifled social and economic activity and has enacted barely any travel bans.The country? South Korea.

Much has been written of how Korea deployed mass testing of up to 20,000 people per day, offering immediate corollaries of early-stage isolation and treatment. Seoul had astutely leveraged technology, from drive-through test centers to self-monitoring apps.

Cultural factors were also in play. Korean governments have customarily had more of a “Nanny State” mentality than Western democracies. As a result, there has been minimal complaint about invasions of privacy – such as, for example, when big data and GPS are used to track the movements of the infected.

And Koreans, like other East Asians, habitually wear dust masks to fend off pollution. Given near-universal wearage, it seems likely that those with the virus but asymptomatic have not infected others. Meanwhile, Western authorities caution against public mask use.

Moreover, Korea is, geopolitically an island, surrounded on three sides by ocean and on one by a fortified border. However, it has effectively emplaced health monitoring facilities and programs at all ports of entry.

But the above are tactics and conditions. What has been less written about is the overriding principle Seoul placed over virus control. That principle is democratic governance.

“Korea as a democratic country, values globalization and pluralistic society,” Vice-Minister of Health and Welfare Kim Gang-lip told foreign reporters last week. “For these reasons, Korea is adopting a different model for responding to contagious disease outbreaks. The key tenet of our model can be defined as a ‘dynamic response system for open democratic societies.’”

So, what has South Korea not done?

It has enacted no suppression – even of a religious sect that kick-started mass infection – and no lockdowns, even in the hot zone of Daegu. Bullet trains ran into, out of and through the city.

Although Koreans are subject to travel bans, restrictions and quarantines from more than 100 countries, the country has only halted incoming travelers from Hubei and Japan, the latter, for political reasons. All incoming travelers are screened on entry and provided with monitoring apps.

While mass gatherings are halted and museums, schools and universities are closed, shops, cafes, bars, gyms, etc, remain open. There has been no panic buying.

“We have tried to avoid interrupting the daily life of the people,” said Vice-Minister of Foreign Affairs Lee Tae-ho.

Even so, economic damage is mounting and emergency budgets are being mobilized. Downtown shopping precincts are near-empty. Lay-offs are underway. Small businesses Asia Times has canvassed – taxis, shops, cafes and restaurants – complain revenues are down 50% or more.

Compare this moderate response to the extreme Western measures, in which economic and social intercourse is being suspended largely or totally.

No government is a single-issue organization, but we are currently witnessing single-minded prioritization: virus management. Extreme political decisions are being taken at a time when the global economy is on the brink.

Markets that started turning bullish over the novel coronavirus and the related dry-up of China’s supply chain had been on the rise since the 2008 global financial crisis, so were overdue for a correction, or overcorrections.

Then came the oil-war shock. Then, two of the world’s most vital economic zones – the United States and EU – started radically restricting transport and intercourse while stifling economies. Some $30 trillion has been wiped off global equity valuations.

Amid this perfect storm, lockdowns are a questionable “one-size-fits-all” response that does not prioritize the key at-risk populations, which is those with existing health conditions and above all, the aged.

Why, then, are resources and systems not tailored to this demographic?

Essential hygiene, distancing, caution and monitoring protocols essential for the protection of the aged can be laid over existing family care and social welfare care frameworks. Greater attention to the needs of the aged could feasibly emerge as a positive byproduct of the Covid-19 crisis.

Were that done, low-risk members of the population could be freed from lockdown to continue breathing at least some oxygen into  economies.

But lockdowns are increasingly the order of the day. B2C sectors – travel and tourism, hospitality and retail, catering and leisure, sport and entertainment – face devastation.

Big players, such as airlines, will likely benefit from bailouts. But these sectors are heavily populated by small, family-run businesses that require cash flow: Shops and BnBs, restaurants, cafes and bars, gyms and leisure operations.

The hit to Italy’s economy – one heavily based upon Mom ‘n Pop operations – is barely imaginable.

Who are influencing media and government? A handful of professional epidemiologists who have become talking heads in global media are forecasting 70-80% infection rates. These data points are being regurgitated by leaders such as Germany’s Angela Merkel.

But not only do we know now that some models for prior pandemics were overstated, some influencers are positing absolute worst-case scenarios.

“Two distinguished epidemiologists are providing much of the commentary around the Covid-19 outbreak,” Dan Strickland, a retired  US epidemiologist, told Asia Times, noting that “their predictions carry much weight with media and policymakers.”

However, “both are choosing to describe the worst-case scenarios of the outbreak, likely out of an abundance of understandable caution,” Strickland continued. “Not all agree with those assessments, but at this point, US state and local governments are preferring that highly cautious mindset for setting policy.”

In the EU, governments seem spooked by the Italian death toll. But Italy has the oldest population in Europe and its death rate, hovering at more than 5% is well north of the average – which a very recent study calculates at about 1.4%.

Big picture data is telling. Global infections now number just under 200,000 cases. They will no doubt exceed that by the time you read this. In a global population of 8 billion, the number of infected would have to soar to 80 million just to reach 1%. Fatalities at present are under 8,000, or  0.00001% of the population.

If, in time, professionals’ estimates are proven badly skewed, they – and the officials who took worst-case scenarios at face value and used them as bases for policymaking – must consider their responsibility.

Long term, they may have cried “wolf” – if a truly existential pandemic appears, their predictions may be jeered at and ignored. Near term, they may find themselves blamed for massive economic carnage.

A 2018 study by the National Academy of Science of the USA found stresses from the 2008 recession literally lifted US blood pressure. A 2016 Lancet studyfound some half a million cancer deaths worldwide were linked to the same recession. A study from Oxford found more than 10,000 suicides were linked to the recession.

More? Post-recession austerity drove 10,000 suicides in the EU and US, 10,000 British families into homelessness and one million people into depression, according to a report in The Guardian in 2013.

A Covid-19-prompted recession now looks a certainty. How long it will last is unknown. If the virus peaks in April, there is the possibility of a bounce back, driven by pent-up consumer potential exploding, and a V-shaped recovery in the summer. But that is speculation.

What is more certain is those at mortal virus risk fall into clear percentiles. Those at risk of economic fallout represent a far wider category. The upcoming recession could feasibly kill more than the virus.

Given such grave potentialities, national governments must focus beyond single issues. They need to calibrate risks, prioritize aims and consider all options from broad and multiple perspectives before acting – and then, acting with prudence, not panic.

In that they have sound case studies – notably South Korea, but also fellow Northeast Asia democracies Japan and Taiwan – to benchmark.

Alas, though, the time for that may already be past.