Crisis and Opportunity: A Positive Spin on the Current Coronavirus Pandemic Matthew Ehret 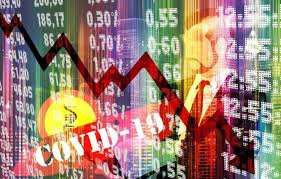 The past weeks have seen the world swept up by a maelstrom of hysteria, misinformation, and confusion under the guise of a new global pandemic. The oversaturation of information overwhelms the senses and is almost designed to inflame the mass panic, which has taken a life of its own and even threatens to trigger a total financial blowout of the trans Atlantic bubble economy. What people thought the American elections were just a few weeks ago has profoundly changed and the crisis has induced even Tulsi Gabbard to step down and endorse creepy Joe Biden while Bernie’s campaign crumbles slowly into oblivion.

In the midst of this disorder threatening to turn nation states upside down, some perspective is in order.

What We Know So Far…

Whether or not the coronavirus is a bioweapon as some analysts (and certain government officials) claim, or whether it is a wind egg as was outlined poignantly by Dr. Wolfgang Wodarg, the fact remains that powerful forces have made an effort to steer governments into chaos in a global putsch for a new fascist dictatorship.

Evidence of the open conspiracy behind this agenda can be seen by the October 19, 2019 “global pandemic exercise” called Event 201 co-sponsored by the Michael Bloomberg School for Public Health at John Hopkins, Bill and Melinda Gates Foundation, the American Central Intelligence Agency and World Economic Forum. The forum stated that “Event 201 simulates an outbreak of a novel zoonotic coronavirus transmitted from bats to pigs to people that eventually becomes efficiently transmissible from person to person, leading to a severe pandemic.”

December 11, 2019 Coverage of Event 201 on Contagion Live stated “by its end, worldwide leaders were faced with a pandemic that involved more than 10 million cases, with the disease spreading rapidly through low-income districts of “mega-cities” around the world. Governments had issued travel bans, crippling the global travel and tourism industries. Thanks to these and other factors, the global economy was in ‘freefall’ with financial markets in tatters.”

This is a bit jarring as we compare these October 2019 scenarios to the events unfolding today.

One invariant of the many presentations that occurred during Event 201 (which were recorded and are still available on the official website) is the conspicuous absence of nation states playing any guiding role to solve this “hypothetical” global crisis. Representatives of the deep state performing at the event continuously emphasized the need for new regimes for global governance, data and perception management, financial distribution and crisis management by the private sector and civil society. But sovereign nation states had hardly any role to play in any of this.

Harkening back to the memories of the neocon manifesto Project for a New American Century which called for a new “Pearl Harbor-like” crisis to polarize the population months before 9-11 was unleashed, a leading figure at the event named Dr. Eric Toner stated “We want to show policymakers, business leaders, and global public health organizations that a severe pandemic may be as disruptive to a country as a national security event can be.”

Just as we saw in the days and weeks preceding 9-11, the oligarchy wants chaos and they want nation states to crumble in the midst of the emerging storm.

An Opportunity Amidst the Crisis

The obvious maliciousness of this Dark Age agenda aside, the question should be asked: is there a positive angle anywhere to be found amidst this desire for controlled chaos?

In the Chinese language, “crisis” and “opportunity” are expressed by the same word and this ironical dual meaning applies as much to today’s global crisis as anything else.

The reason is that a race is being waged between those forces representing legitimate nation states of the world in defense of the people vs. those Malthusian technocrats who are committed to managing this crisis in defense of themselves. It has been known since ancient times that in periods of crisis such as we are currently experiencing, great sweeping changes can occur both for the good (as we have seen in the case of FDR’s war with Wall Street during the Great Depression), or for evil (as with Wall Street’s “fascist economic miracle solution” called Hitler). Hitler and FDR both promised “economic solutions” when they gained power in 1932, but the principles emanating from either system were as opposed then as the China-Russia Multi-polar alliance is to the Uni-polar cage of the Trans-Atlantic today.

In spite of the 70 years of moral decay since FDR’s untimely death, elements of national reflexes are being felt across the Trans Atlantic- from Spain’s nationalization of their healthcare system to President Trump’s efforts to invoke national controls to remobilize America’s decayed industrial base in order to begin to produce materials that are in the national interest and which decades of free trade nation stripping have destroyed. Mexico’s President Lopez Obrador recently set a major new precedent for banking in his announced national bank plans for his country, which if successful, would create new mechanisms to finance the long-term infrastructure which Mexico (and all western nations) so desperately needs.

In demonstrating what a real nation does when it is guided by leaders who actually care about their people, President Xi Jinping recently said “China will act prudently from beginning to end and strive for an early and complete victory over the epidemic, so as to provide other countries with confidence in their prevention and control efforts… China is willing to work with Italy to contribute to international cooperation in combating the epidemic and to the construction of a Health Silk Road”

A recent press release by Executive Intelligence Review provided a four-fold remedy currently in circulation across western governments and very much worth reviewing now:

“1. A system of bank separation must be introduced immediately on a worldwide scale, based exactly on the model of the Glass-Steagall Act signed by President Franklin Roosevelt on June 16, 1933. Commercial banks must be put under Federal protection under this system and completely separated by a firewall from speculative investment banking firms and units, which will no longer have any access to the assets of the commercial banks, nor have the privilege of being saved by taxpayers’ money. The toxic paper of these banks, including their outstanding financial derivatives contracts, must be written off. Legitimate receivables that are connected with the real economy or with pensions and other assets of working people should be classified as valid in the new system as well. Some types of claims for payment must be provisionally frozen and reviewed for validity by Federal institutions.”

“2. A national bank must be founded in each country, in the tradition of Alexander Hamilton or on the model of the German Kreditanstalt für Wiederaufbau (Reconstruction Finance Corporation) after World War II. Their purpose is to supply Federal credit for productive investments that will provide the physical economy with the necessary funds. The issuance of these credits must be guided by the principles of high energy-flux density and an optimal increase of the productivity of productive capacities and the powers of labor, through an emphasis on scientific and technological progress.”

“3. Among the participating countries, a system of fixed parities must be established, and cooperation treaties must be established among sovereign states for the purpose of well-defined infrastructure and development projects. These treaties together represent in fact a New Bretton Woods system as it was intended by Roosevelt, with the explicit intention of providing credit for the industrial development of the developing sector.”

“4. An urgent increase in the productivity of the world economy—to accommodate a world population of presently almost eight billion people —must be facilitated through an international crash program for the realization of thermonuclear fusion power and other advanced technologies, in such fields as optical biophysics and life sciences, in order to find solutions for challenges such as the coronavirus. This increase in productivity must also be enabled through international cooperation in space technology and travel, which can establish the necessary next higher economic platform for the world economy, as this concept has been developed by the economist Lyndon LaRouche.”

If America is going to avoid the fate of Germany in 1932, then Trump should take the opportunity to pull thousands of American troops out of the Middle East under a genuine mobilization to start rebuilding the nation’s health care system, infrastructure and factories. If a major banking reform is initiated as outlined in the above EIR proposal and if western nations heed President Xi Jinping’s brilliant calls for a global “Health Silk Road” then there is reason for great hope even amidst the despair of the current crisis.

30 Facts You Need to Know: Your COVID Cribsheet