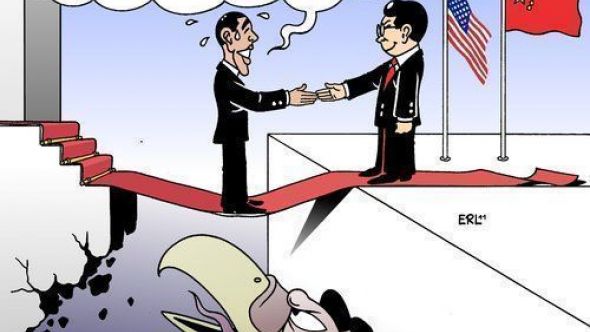 Washington’s strategic pressure over Beijing assertiveness in the South China Sea, including measures such as US military reconnaissance activities and political and military coordination with China’s neighbours, adds additional threats in Asia Pacific in the broader context of bilateral ties discussed last week in Washington during the annual U.S.-China strategic and economic dialogue.

Washington has bolstered its Asia Pacific monitoring systems, including closer political and military cooperation with Japan, the Philippines, Vietnam and Australia. Beijing, meanwhile, declared by mid-June that it had concluded dredging enormous amounts of sand from around the Mischief Reef to build up land mass in South China Sea’s Spratly Islands during six months, according to the Pentagon. This in principle is the reason for US sabre rattling concerning China’s assertiveness in an energy rich region through which $5 trillion in ship-borne trade passes every year.

It is not unlikely that China may resume work in that area in case it deemed necessary. Actually, anticipating maritime conflict, on June 17 Beijing approved measures requiring civilian shipbuilders to ensure that new ships can be used by the military during an emergency. Piling sand in the South China Sea is a matter of contention although its best definition so far is “sand wall”, a concept recently used by US strategists. In other words, defensive structures.

One can understand Vietnam and the Philippines disagreeing with Beijing. Actually backed by US lawyers, the Philippines will present the South China Sea case at The Hague next month. Malaysia and Brunei’s territorial claims overlap in the South China Sea as well. But it is unreasonable for a power like the United States, whose main territory is thousands of miles away resort to military pressure as judge and jury in the area.

The Pentagon has systematically highlighted the increasing budget of its strategic competitor, but China clearly lies behind. In 2014 China’s military expenditure reached $ 216 billion, 2.1% of its GDP, compared to America’s $ 610 billion, 3.5 % of its GDP, according to the Stockholm International Peace Research Institute (SIPRI). And while it is true that over the last decade China’s has added significant numbers of submarines to its fleet plus one aircraft carrier – and two under construction – compared to America’s 11 aircraft carriers, Beijing’s ability to project naval power is clearly limited far from its shores.

As for cyber capacities (the newest defence tool), China certainly has its own developing capabilities, very highly assessed by the US military, in any case behind America’s clear lead over the rest of the world, as Edward Snowden has revealed. The prospects of open conflict here are blurry and potentially more devastating than the prospects of naval clashes.

As for threats in Asia, actually radical islamist separatist movements in China’s Western territories are among Beijing’s highest security threats. Several inspired or organized attacks at local and national level have been concocted there as well as in neighbouring Central Asia, including one suicide attack in Tiananmen Square in November 2013. One wonder why Washington exerts pressure in the South China Sea neglecting potential US-China plus Russia dialoge and cooperation on common security concerns in Central Asia.

Psychologically speaking one may assume that Washington is not happy with the latest IMF figures disclosed last October showing that measured at purchasing power parity (PPP) Chinese economy is worth $ 17.6 trillion, compared to America’s $ 17.4 trillion. Notwithstanding the fact that China’s per capita income is far behind dozens of countries, it is sour statistics for a country that likes to call itself “indispensable” and “number one”. For the first time the US is overpassed by another power since 1872 and the gap is widening.

Furthermore, China is somehow altering international relations dynamics by rapidly reinforcing economic ties around the world. The US has signed free trade agreements (FTAs) with 20 countries compared to China’s over 13 FTAs and growing, the last ones being signed by Beijing precisely this month with Australia and South Korea, two important US allies.

George W. Bush had defined China as a „strategic competitor“ and Obama had continued the strategy. In March 2001, soon after Bush took office, a US EP-3 spy plane visibly showed around the South China Sea space provoking a diplomatic row. Then came September 11 and Washington deviated its attention to Irak and Afghanistan. The results are well known, including gross human catastrophe and mismanagement strategically reverberating in large parts of Eurasia. Actually that deviation from the East significantly went to China’s advantage. Not precisely a brilliant balance, paraphrasing Joseph Nye’s “smart power” concept.

In 2015 observers and analysts are back to the South China Sea. But now the panorama looks more uncertain than a decade ago and more actors are willing to play assertive roles. In the last week of June, Japan announced that it may join the US in regular South China Sea patrols, following an invitation made by the American navy earlier last month.

On February 2009 President Xi Jinping, then Vice President, delivered a famous speech in Mexico in which he indirectly replied to US cyclical criticism by declaring that: „China does not export revolution, hunger, poverty, nor does China cause you any headaches. Just what else do you want?“ All the evidence shows that Beijing does not to want to replace US role in the world. It does not feel comfortable with it, neither in military nor in cultural, political or economic terms. At most Beijing feels able to exert some kind of regional predominance, but even that is difficult for a superpower as China, at the same time a Third World country in full development and huge internal challenges.

US-China relations are profound in all fields now – the world’s two largest economies have $590 billion in two-way trade- and in principle the prospects of open conflict seem remote if we see the strategies of economic actors from both sides. On June 18, one week ahead of the US-China Summit, American technology company Cisco signed a memorandum of understanding with the National Development and Reform Commission, announcing investment for more than $10 billion in China in the coming years to support innovation and globalization. In both countries young people admire each other’s Internet technology leaders such as Microsoft’s Bill Gates and Alibaba’s Jack Ma. In spite of that, contradictions are also there, as shown in the 2010 Google affair, when the American company was displaced from China accused of espionage (Google arguing the opposite plus unfair competition). This mutual mistrust is also visible at commercial levels as well, including pending barriers to each other’s investment, still not solved during the last annual U.S.-China strategic and economic dialogue last week.

At the level of perceptions, few days ago China’s official News Agency Xinhua disclosed the results of an online poll among Chinese Facebook users showing that 43% of more than 150.000 respondents believed that China is a friend of the US against 23% disagreeing. In view of China’s size and diversity the results are certainly not concluding at all, they rather show how the Chinese government feels at the US at the moment.

In a broader scope, coincidental US decisions this month to reinforce its naval presence by patrolling together with Japanese ships in the South China Sea plus to bring heavy weapons to Eastern Europe, are typical containment strategy measures dating back to George Kennan’s time. In other words, a Cold War Eurasia strategist’s ideas for the wrong time. An open conflict, including massive cyberattacks, between China and the US is unthinkable but theoretically possible. This contradiction stays potentially stemming from South China Sea territorial disputes as well as from other broader security issues in the Asia Pacific.