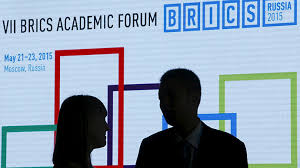 The new BRICS initiatives break the monopoly of existing western institutions over the financial order – a very important symbolic change, as it’s the first time a global financial institution is led by developing countries, said experts to RT.

“If the new development bank experiment succeeds, it will show the world that the emerging countries can do and manage a multilateral economic institution by themselves,” Akshay Mathur, geo-economic fellow head of research at the Indian Council on Global Relations, told RT at the BRICS academic forum.

While talking about the bank’s challenge to western-dominated financial system, he said that one of its goals is to stimulate lending to countries in local currencies for the new projects in that region.

“A lot of trade between China and Russia is already taking place in local currencies. As far as India is concerned, it’s not that advanced, but in some areas – yes, we are using local currencies,” he said adding that the main advantage of the banks’ moving away from the dollar is that trading in local currencies reduces the operational cost.

Risk of China’s domination
Akshay Mathur also pointed out the potential risks the bank may face, cautioning that China, the largest of the five BRICS economies, could end up dominating the new financial institution.

China has already shown notable success in internationalizing yuan. It is issuing foreign loans in its national currency and has currency swaps with 21 countries.

“China is lending now more than the World Bank and the IMF combined in Africa and Latin America. So, what I mean about the risk of Chinese financial architecture is that we want to move to a more multilateral multi-currency equitable architecture, because now we have been moving from the risks of one currency [the US dollar – Ed.] to the risks of another,” he said.

The fact that the BRICS countries are setting up new institutions doesn’t mean that they are abandoning all of the existing ones, said Oliver Stuenkel, Professor of International Relations at Fundação Getúlio Vargas (FGV) in São Paulo.

“I don’t think the BRICS countries are fully betting on new institutions which may have dominance by China, but I think BRICS institutions will have more capacity to engage both institutions reducing the risk that one country dominates all of others,” he said.

Despite holding the pre-eminent position in the West’s economy, the World Bank is also in the process of adapting to the rise in influence of other less developed countries. BRICS group will actively encourage this trend by seeking to reform existing institutions, while at the same time creating new ones, he added.

Non-BRICS participants
Apart from the BRICS, there are other countries showing interest in entering the new development bank, said H.H.S. Viswanathan.

“Already some European countries, particularly Scandinavian countries, Finland, have shown interest, although it’s North. There will be countries who will be interested. Because they think that it’s going to be a success,” he said, adding that the bank itself is interested in inviting new members.

Brazil, Russia, India, China and South Africa established the New Development Bank, along with a reserve currency pool worth over $100 billion, during the 6th BRICS summit in July 2014. The bank will finance infrastructure projects in the BRICS and other developing countries, and is expected to begin operations by the end of 2015, with its headquarters in Shanghai.