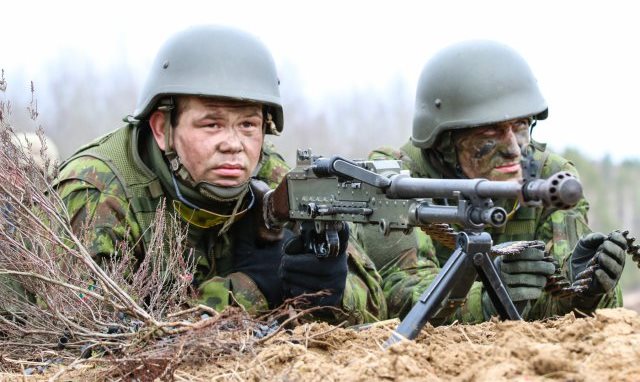 A headline in the US military magazine Stars and Stripes last September was eye-catching. It told readers that there were “Big guns, better chow for US soldiers on Russia deterrence mission” in Lithuania. Apparently the guns and chow were provided for the “500 173rd Airborne Brigade soldiers that swooped into the Baltics this month on a mission to deter Russian aggression.”

Then the UK’s Observer newspaper informed us that “US Special Forces have been deployed close to the border with Russia as part of a ‘persistent’ presence of American troops in the Baltics. Dozens of special ops solders are being stationed along Europe’s eastern flank to reassure NATO allies Latvia, Lithuania and Estonia. The move will also allow the US to monitor Russian manoeuvres amid fears of further destabilisation following its annexation of Crimea in 2014… US special operations forces will complement around 4,000 Nato troops posted to Poland, Lithuania, Estonia and Latvia in the coming months.”

It was noted by Nick Turse on January 9 that “for the past two years the US has maintained a Special Operations contingent in almost every nation on Russia’s western border. As Special Operations Command chief General Raymond Thomas put it last year, ‘We’ve had persistent presence in every country — every NATO country and others on the border with Russia doing phenomenal things with our allies, helping them prepare for their threats.”

What threats? What Russian aggression? What destabilisation? Russia has never threatened any Baltic State and there is not the slightest piece of evidence that Russia wants to invade Lithuania. Their trade balance is that Russia imports total $2.5 billion a year from Lithuania and exports are $3.3 billion and it is in the best interests of both countries to expand this mutually beneficial arrangement, although it seems a trifle strange that although Lithuania’s exports declined by 2.5 per cent in 2016, this was in part “explained by the drop in exports of oil products (due to American competition).”

But all US and most European mainstream media claim that when the majority of the citizens of Crimea voted in a referendum to rejoin Russia, this was somehow evidence of Russian aggression, extending to the Baltic.

As the BBC reported in March 2014, “voters were asked whether they wanted to join Russia, or have greater autonomy within Ukraine” and made their preference clear. In the period between the US-inspired coup in Ukraine and the vote to rejoin Russia there was not a single case of bloodshed in Crimea. The Organization for Security and Cooperation in Europe was asked by the government of Crimea to send representatives to monitor the referendum but refused to do so.

There were energetic attempts in the West to paint the post-accession treatment of Ukrainians in Crimea as harsh, but even the ultra-right-wing UK Daily Telegraph reported that “Like many of the Ukrainian servicemen in Crimea, the 600-strong marine battalion in Feodosia has strong local links. Many of the men are either local recruits or have served here so long they have put down roots. Only about 140 of the 600-strong battalion stationed here are expected to return to Ukraine. The remainder, with local family and friends, have opted to remain in Crimea — the land they call home.”

Exactly a year after the referendum Forbes noted that “…the Crimeans are happy right where they are . . . poll after poll shows that the locals there — be they Ukrainians, ethnic Russians or Tatars — are mostly all in agreement: life with Russia is better than life with Ukraine… Despite huge efforts on the part of Kiev, Brussels, Washington and the Organization for Security and Cooperation in Europe, the bulk of humanity living on the Black Sea peninsula believe the referendum to secede from Ukraine was legit.” Not much evidence of Russian aggression there — but a great deal of evidence of Western interference aimed at destabilising the region.

The US-NATO military alliance, the Brussels-Washington nexus mentioned by Forbes, refuses to believe that the citizens of the Peninsula are content or that Russia has no desire to “annex” any territory. As Stars and Stripes informs us, the big guns and better chow for US soldiers sent to Russia’s border are “part of Operation Atlantic Resolve, the United States’ commitment to deter aggression in Europe in response to Russia’s 2014 annexation of the Crimean Peninsula.” The drumbeat of “annexation” is continuous and as with many propaganda campaigns has succeeded because Western media seldom permit publication of even-handed accounts of what actually happened. The Psyops campaign directors are guided by the old saying that “if you tell a lie big enough and keep repeating it, people will eventually come to believe it”, which is wrongly attributed to Josef Goebbels but spot on for accuracy.

In February 2015 the Washington Times and the UK’s Daily Mail published an objective piece by Steven Hurst of Associated Press in which he stated that “Since the Soviet collapse [the US-NATO military alliance] — as Moscow had feared — has spread eastward, expanding along a line from Estonia in the north to Romania and Bulgaria in the south. The Kremlin claims it had Western assurances that would not happen. Now, Moscow’s only buffers to a complete NATO encirclement on its western border are Finland, Belarus and Ukraine. The Kremlin would not have to be paranoid to look at that map with concern.”

Steven Hurst, it should be noted, is an “AP international political writer [who] reported from Moscow for 12 years and has covered international relations for 33 years.” No Western mainstream media published his piece of balanced analysis. Well, they wouldn’t would they? — it didn’t fit with the propaganda line.

After the Warsaw Pact disbanded in March 1991 the US-NATO military alliance, although deprived of any reason to continue in existence not only kept going but in 1999 added Poland, the Czech Republic and Hungary to its then 16 members. As the BBC noted, these countries became “the first former Soviet bloc states to join NATO, taking the alliance’s borders some 400 miles towards Russia.”

NATO continued to expand around Russia’s borders, with Bulgaria, Estonia, Latvia, Lithuania, Romania, Slovakia and Slovenia joining in 2004. As President Putin observed in an interview with Italy’s Corriere della Sera in 2015, “we are not expanding anywhere; it is NATO infrastructure, including military infrastructure, that is moving towards our borders. Is this a manifestation of our aggression?”

But US Big Guns and Better Chow will continue to surge against Russia’s borders, as the US-NATO alliance continues its confrontation. Russia will have to remain militarily alert for the foreseeable future, until saner councils prevail in the West’s military-industrial complex.