BREXIT: Follow-Up?: US Asks Russia to Cooperate in Syria, New Possibilities on the Horizon 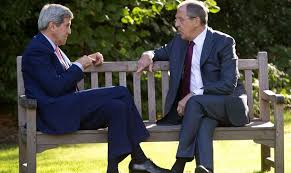 PETER KORZUN | 04.07.2016 | WORLDAmidst the growing tension, Washington has come out with a groundbreaking proposal that could lead to greater cooperation with Moscow in Syria – one of the biggest shifts in strategy since the start of the Syrian conflict.

This is a major US diplomatic effort to contain the crisis in Syria after peace talks in Geneva failed.

The United States transmitted the text of the proposed agreement to the Russian government on June 27 after weeks of negotiations and internal Obama administration deliberations.

The crux of the deal is a US promise to join forces with the Russian Aerospace Forces to share targeting and coordinate an expanded bombing campaign against Jabhat al-Nusra, the al-Qaeda’s branch in Syria, which is primarily fighting the government of Syrian President Bashar al-Assad.

The plan would require «moderate» opposition forces to disentangle themselves from the al-Nusra group and move into identifiable areas where they would not be vulnerable to government and Russian air attacks. It isn’t clear to what degree the US would begin to provide any detailed targeting information to Moscow. Under the proposal, the United States would specify geographic zones to be excluded from the target list.

The offer would expand cooperation beyond the «deconfliction» talks the US and Russian militaries launched last year. Russia and the United States, while backing opposing sides in Syria’s civil war, co-chair an international task force that agreed early this year – along with Assad and the opposition – to support a «cessation of hostilities» and begin negotiations for a political solution that would allow the international community to turn its full attention to the fight against the Islamic State.

The Russian government has yet to respond to Obama’s proposal. Deputy Foreign Minister Sergei Ryabkov said, Moscow will study the proposal attentively. There will be many details to be discussed. No doubt, the foreign and defense chiefs of both countries will have a lot of work to do. If agreed on, the plan will make Russian and American militaries cooperate at an unprecedented level. As a result, the strategic landscape in Syria is set to shift significantly.

Russia has many times called on the United States to cooperate on Syria’s conflict since the start of the Russian counter-terrorist aerial campaign in September. For instance, on May 20, Russia proposed joint airstrikes with the US-led coalition in Syria against the al-Qaeda-linked al-Nusra Front group and other factions, as well as against convoys of arms and fighters crossing the Syrian-Turkish border.

The US rejected this offer. Now it has to do an about-face. As CIA Director John Brennan said on June 27 in remarks at the Council on Foreign Relations «There’s going to be no way forward on the political front without active Russian cooperation and genuine Russian interest in moving forward».

The Obama administration is understandably trying to find some creative way to salvage its Syria policy in its final months before a new team takes its place in January, 2017. The announcement of the United States policy shift comes at the time a new meeting of Russia-NATO Council has been agreed on upon the initiative of US-led NATO. The news was made public by French Foreign Minister Jean-Marc Ayrault after he held talks with Russian Foreign Minister Sergey Lavrov in Paris on June 29. The Council’s meeting is the right place for the two great powers to address burning security issues.

With little time left for the Obama administration, the next US President will carry the burden of making military decisions. In his address to Russian ambassadors gathered in Moscow from across the world on June 30, President Vladimir Putin said that he was «prepared to work with any future President» and was interested in closer cooperation with the United States in international affairs. «However, we consider unacceptable the approach on the part of the American establishment, which believes that they can decide in what issues they will cooperate with us», the President added.

It’s well-known that the US-Russian relations are at a low ebb. The political stocks are at their historic lows since the most dramatic moments of the US-Soviet confrontation half a century ago. It occurs at the time Russia and the United States confront the multitude of very urgent problems – from international terrorism and climate change, to global migration management and United Nations reforms. This is the time the great powers should engage in a dialogue to focus on the emerging challenges of the twenty-first century, setting aside the problems that divide them. Although slowly, the American government starts to realize that no major international problem can be solved without Russia. The latest initiative on Syria confirms this fact. There are a number of fundamental disagreements between Russia and the US on how the world should be managed and what the future global order should be like. It’s impossible to ignore the deep gap in perceptions, but the leaders of the Russian Federation and the US have a special responsibility to confront and contain the present global destabilization, as well as to build a new system of international relations. There is no plausible excuse for not trying to work together wherever possible. After Ukraine’s crisis broke out, Russia and the US did cooperate on a number of critically important international problems. The Iranian deal became possible to a large extent due to their consorted efforts. The elimination of the Syrian chemical arsenal was completed primarily through their joint actions. A joint effort to achieve progress in Syria would be a great accomplishment and a major step ahead to a safer world.