Brasilian’s President Roussef Must Not Be Defeated in Forthcoming Second Vote! 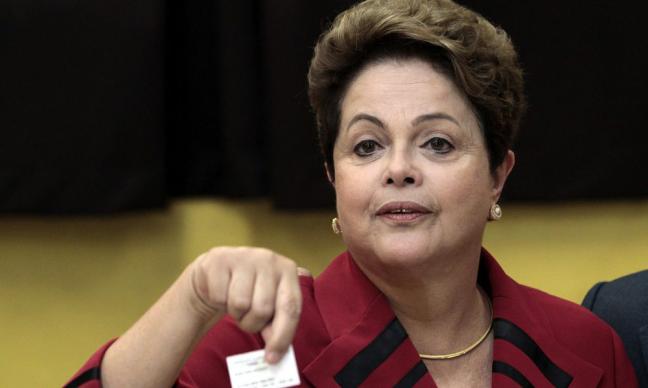 After the corporate media and the CIA and George Soros manipulators tried to engineer Green Party-turned-Brazilian Socialist presidential candidate Marina Silva into the Brazilian presidency after the classic CIA textbook aerial assassination of Socialist Party presidential standard bearer Eduardo Campos, these same forces are at it again on behalf of Social Democratic Party candidate Aecio Neves. Although Neves was polling in second place to Brazilian President Dilma Rousseff before the first-round presidential election on October, the death of Campos and his senior aides in a highly suspicious plane crash on August 13, forced Neves into third place in polls. Silva, a favorite of Soros and his international network of cash-flush non-governmental organizations, was propelled into second place.

However, thanks to an aware Brazilian investigative journalism press corps, Silva’s connections to Soros and his team of interventionists and hedge fund tycoons was exposed. With Brazilian voters wise to Silva’s puppet strings to Soros and other global bankers, she managed to only come in third on October 5. Silva subsequently endorsed Neves, Soros’s second selection to take over the reins of presidential power in Brazil from Rousseff.

Neves’s chief economic adviser and the man who would become Finance Minister in a Neves presidency is Arminio Fraga Neto. A former close friend and associate of Soros and his Quantum hedge fund, Fraga is hoping that a Neves presidency will open up Brazil to “market forces,” the very same forces that have declared economic war on Venezuela and are attempting to swindle Argentina through vulture funds run by Soros’s Wall Street friends. Fraga, a habitué of the annual World Economic Forum in Davos, Switzerland, is also a former executive with Salomon Brothers and a former president of the Brazilian Central Bank. Fraga has also been linked to Goldman Sachs through a Manhattan real estate deal involving the purchase of a $7.5 million condominium from a former Goldman Sachs and Lehman Brothers executive. Fraga’s membership of the elitist Council on Foreign Relations and Group of 30 puts Fraga in the same camp as such Wall Street villains as Alan Greenspan, David Rockefeller, former Bank of Israel chairman Jacob Frenkel, and Wall Street apologist/columnist Paul Krugman, and former U.S. Treasury Secretary Larry Summers.

Neves’s grandfather, Tancredo Neves, a left-of-center threat to the longtime Brazilian military dictatorship, fell seriously ill just as he was to sworn in as president on March 15, 1985. Neves’s illness resulted in his lackluster and more conservative vice presidential candidate José Sarney being sworn in as president. Tancredo Neves never recovered from what was said to be diverticulitis and he died on April 21. Later, it was revealed that Neves had a cancerous tumor that was not discovered until it was too late. Rousseff’s sudden illness after her October 16 televised debate with Aecio Neves alarmed a number of Brazilians who remember the fate of Tancredo Neves.

In addition to the Central Intelligence Agency arranging for convenient plane crashes such as those that killed Portuguese Prime Minister Francisco Sá Carneiro, Panamanian leader Omar Torrijos, and Ecuadorian President Jaime Roldos all within a six-month period between December 1980 and April 1981 [after the election of Ronald Reagan as U.S. president and the return to power within the CIA of George H W Bush’s and William Casey’s infamous gunslingers], the agency’s Technical Services Division continued to develop biological weapons, including cancer weapons, to assassinate its political targets.

The CIA’s macabre Jewish-Hungarian chief scientist Dr. Sidney Gottlieb developed a host of biological weapons for the CIA’s MK-ULTRA program during his over 20 years of service with the agency. One was a biological toxin that was put inside a tube of toothpaste that was to be used by Congolese Prime Minister Patrice Lumumba and another was a botulism-infected handkerchief that was to be handed to Iraqi leader General Abdul Karim Kassem.

As for Aecio Neves abandoning the left-of-center credentials of his grandfather, this represents another aspect of CIA influence operations. Aecio Neves represents the interests of Wall Street, which is manifested by the presence of Fraga as his chief economic adviser. Wall Street vultures, including Soros and Fraga’s other associates in New York, want to privatize the Brazilian state-owned Petrobras oil corporation. Therefore, Aecio Neves has been handsomely bought off by the same globalized financial interests who attempted to engineer Marina Silva into office. With her defeat, these same forces have unsurprisingly rallied behind Neves.

For the CIA, blood is not thicker than water. It actually doesn’t matter to Aecio that the CIA may have played a part in assassinating his grandfather. Omar Torrijos’s son, Martin Torrijos, became president of Panama only to sign a pro-Wall Street free trade agreement with Washington. Martin Torrijos also gladly followed the global bankers‘ orders to increase Panama’s retirement age and reform social security. Martin Torrijos also became a close ally of U.S. President George W. Bush even though Bush’s father, George H W Bush, likely signed off on the CIA’s operation to assassinate Torrijos’s own father.

George Soros’s favorite Asian opposition leader, Aung San Suu Kyi, does not seem to mind the fact that it was Soros’s friends at the Office of Strategic Services/CIA who ordered British intelligence to assassinate her father Aung San. Aung San, a founder of the Burmese Communist Party, was slated to become independent Burma’s first post-independence leader. Aung San was killed by terrorists working for pro-British former prime minister U Saw. The weapons for the assassins came directly from British Army Captain David Vivian, who managed, with high-level “assistance” from the Burmese government, to escape from a Burmese prison in 1949.

Canada’s Liberal Party leader Justin Trudeau, the son of former Prime Minister Pierre Elliott Trudeau, has, unlike his father, warmed up to the United States, Wall Street, and the cause of globalization. Justin Trudeau and Aecio Neves are prime examples of how the CIA eagle will take under its wings the progeny of leftist icons to achieve its goals.

President Rousseff’s policies have created powerful enemies within the walls of the CIA in Langley, Virginia and among the board rooms of Wall Street and the West’s most powerful corporations. She succeeded in proving the polls and pundits wrong on October 5 but October 26 remains yet another hurdle. The people of Brazil will be voting on October 26 as if their lives depend on it. For Brazil’s poor and new middle class, a Neves victory will destroy their livelihoods, as well as their very lives.