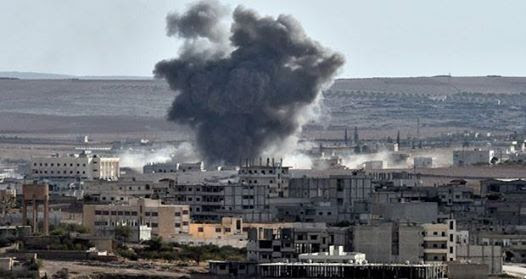 Damascus, SANA – Residents of Ayn al-Arab City to the northeast of Aleppo northern province on Sunday were able to restore two positions which were taken over by the Islamic State in Iraq and Syria “ISIS ” terrorist organization , killing more than 13 terrorists.

Sources in the city said that the locals in Ayn al-Arab and their defense units have launched a counter attack in the southern part of the city as they advanced and they were able to establish control over two positions which were seized by the ISIS terrorist organization.

The counter attack came after a new attempt by the ISIS to establish a full control over the city through launching an attack on the centers of the defense units from four axes while the battles continued on the eastern and southern axes of the city.

On Sunday, the ISIS brought reinforcements to the city to face the fierce defense of its residents.

AKF: We citizens in the Western World must denounce  our government’s support of terrorist organizations like IS! Act within framework of UNSCR resolution 2178 of sept. 24th. Stop funding, training and sending weapons to those monsters.