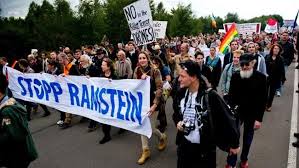 PressTV – Hundreds of anti-war protesters have staged a rally against the US military presence in their country, voicing opposition to Washington’s use of killer drones around the world.

Carrying signs addressed to the US army, which read “go home” and “stop war,” the demonstrators gathered outside the US Ramstein Air Base in Germany’s southwestern state of Rhineland-Palatinate on Saturday.

Slamming the US drone strikes in certain countries, the protesters called for an end the alleged use of the air base as a satellite relay station in the drone program.

“No to the killer terror drones,” read another sign carried by the protesters.

Earlier this year, German media reported that Ramstein has been serving as the command center of the US drone strikes across Africa and the Middle East and that the German government is aware of the attacks.

Reports by Der Spiegel and The Intercept said the US administration frequently sends killer drones to strike alleged terrorist targets in Africa, the Middle East, Pakistan and Afghanistan.

“Signals are transmitted from Ramstein, which tell the drones what they should do,” Der Spiegel quoted an unnamed US official as saying.

The magazine also pointed to documents that say the German Ministry of Defense was informed by the US Department of the Army that it was erecting a relay station for drones in Ramstein in 2011.

The United States carries out targeted killings through drone strikes in Yemen, Pakistan, Afghanistan, and Somalia.

While Washington claims the targets of the attacks are militants, witnesses maintain that in most cases, civilians have been the victims of the airstrikes.
Tags: US