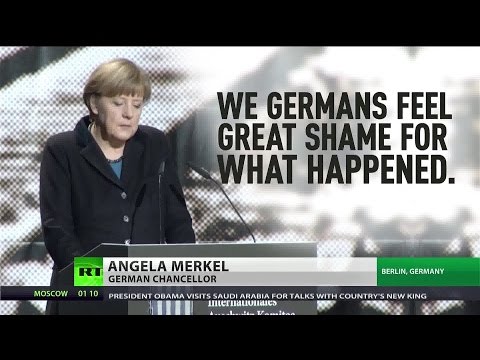 German Chancellor Angela Merkel’s reprimand last week to Japanese leaders to «face up to their wartime past» had an ironic twist that went scarcely noticed. The irony is that it is the German leader who actually stands accused of not facing up to her country’s wartime past. More sinisterly, her historical denial is manifested in actual present-day war-making in Ukraine, and it is furthering a dynamic that could lead to an all-out war with Russia because of baseless Western demonisation of Moscow. A demonisation that Merkel’s Germany is playing no small role in.
For while the German chancellor was lecturing Japan on its legacy of imperial crimes, it emerged that Merkel had decided to snub major forthcoming commemorations scheduled for May 9 in Moscow to mark the 70thanniversary of the defeat of Nazi Germany by the Soviet Union. The far-reaching impact of such a move by Berlin will underpin the reactionary neo-Nazi regime in Kiev and its continual attempts to whitewash the crimes of Second World War German Nazism.
On her controversial absence from Moscow in May, Merkel made some unconvincing reference to present political tensions over Ukraine and alleged Russian interference in that country as the reason for her forthcoming non-attendance. As if by way of offering a paltry consolation, the German leader is instead planning to pay her respects at a wreath-laying ceremony to the “unknown soldier” in the Russian capital on the following day, May 10, along with Russian President Vladimir Putin.
The Berlin rationale for Merkel’s absence in Moscow is not good enough.

By boycotting – and that is what Merkel’s absence amounts to – the May 9 event, the German government is, in effect, giving present political concerns over Ukraine equal importance to what is truly a momentous milestone in the 20th Century. The defeat of a monstrously genocidal German regime in 1945 with the capture of Berlin by the Soviet Red Army is an event unparalleled in the past 100 years.
Europe was liberated from a fascist tyranny that had dominated most of the continent from 1939 until 1945. Up to 30 million Russians – nearly half of the war’s total dead – paid with their lives in the Third Reich’s bid for hegemony, and in the process of neutralising the German war machine. Up to 90 per cent of the German Wehrmacht’s total war losses were incurred on its Eastern Front against Russia. That figure alone tells which of the wartime allies – Soviet Union, Britain or the United States – were instrumental in the historic defeat of Nazi Germany.

So, it is entirely fitting that the May 9 commemorations in Moscow marking the end of the Great Patriotic War, as it is known to Russians, should be seen as the definitive event out of several other Western war anniversaries dedicated to the end of the Second World War and the surrender of Nazi Germany.
It was Russia that won that war, despite Western vanity which purports to elevate their role beyond an objectively marginal contribution in the vanquishing of Nazi Germany. It is therefore a moral imperative that any world leader wishing to genuinely pay homage to the people who sacrificed most in defeating the criminal dictatorship of Adolf Hitler should be at the May 9 commemorations in Moscow. That moral imperative is even greater on present-day German leaders, given the culpability of their country in one of the great war crimes of the past century.

Germany not facing up to its wartime past

Merkel’s de facto snub of the Moscow war memorial this year is thus a grave sign of Germany not facing up to its wartime past – and ironically in the same week that the German chancellor was in Japan lecturing Japanese Prime Minster Shinzo Abe on his moral obligations over past war guilt.
By the way, Japanese leaders, including Abe, have already made formal apologies for their country’s imperialist raping of China and Korea. In 1995, then premier Tomiichi Murayama made a landmark statement of reparation, and in 2007 Abe issued a written apology to China. Conservative low-key Japanese culture perhaps gives such apologetics an air of insouciance or lack of sincerity. And yes, Abe has made several public visits to pay respects at the Yasukuni war memorial in Japan where alleged Japanese war criminals are buried among many other war dead.
However, seen from a Japanese perspective, why should it be singled out for its need to apologise and face up to wartime crimes? On the same day of Merkel’s visit to Japan, March 9, the date also marked the 70th anniversary of the firebombing of Tokyo by the US Air Force. That bombing raid resulted in more than 100,000 Japanese civilians being incinerated in a two-day period involving over 300 B-29 Super Fortresses dropping incendiaries along with TNT payloads. Five months later, in August 1945, the US was to drop atomic bombs on Hiroshima and Nagasaki killing another 200,000 people, mainly civilians.
America and Britain used similar «strategic area bombing» on the German cities of Berlin, Hamburg, Essen, Cologne, Leipzig and Dresden, where the combined civilian death toll from such raids amounted to at least half a million, again, mainly civilians.
Where is the «facing up to wartime actions» by either Washington or London? Precisely, none. So is it any wonder that Japan perhaps feels an ambivalence about unilateral professions of guilt when Western crimes of similar magnitude are simply ignored or even justified by the West?
But getting back to Merkel and her snub to Russia over its historic defeat of Nazi Germany. One cannot explain her actions as simply a random error of poor political judgement.
It is reprehensible enough that Merkel should equate present political concerns over Ukraine and largely unfounded claims of Russian aggression with the defeat of Nazi Germany. The former is a subjective issue and conditioned by dubious political claims largely made by US-led NATO, with scant evidence, which even the German authorities in a Der Spiegel report have lately expressed misgivings about the veracity of.
Furthermore, and this is what is even more unconscionable, Merkel’s planned absence from Moscow on May 9 is part of a disturbing recent pattern of re-writing the Second World War, the heinous role of Nazi Germany, its covert Western backers, and the honourable achievement of the Soviet Union in smashing European fascism.
At the end of January, Russian President Vladimir Putin was not invited by the Polish authorities to attend the 70thanniversary of the liberation of Auschwitz. Even though it was Russia that liberated that Nazi death camp, and the commemorative event was attended by German and French officials.
This is part of a systematic ideological trend whereby the crimes of Nazi Germany and those who supported it are being re-written and gradually lessened. The heroic role of Russia is slowly being airbrushed out of history.
And what gives this historical revisionism impetus is the US-led Western geopolitical campaign to confront and undermine Russia. That campaign of economic sanctions and rampant NATO militarism across Europe is being spearheaded by the Western-backed neo-Nazi regime in Kiev.
Berlin is, along with Washington, responsible for the illegal regime change in Ukraine that took place in February 2014, which saw the overthrow of a constitutionally elected government and the installation of a neo-Nazi junta. The new Kiev regime of Western-backed Prime Minister Arseniy Yatsenyuk and President Petro Poroshenko openly adulates and glorifies Second World War Ukrainian regiments that assisted the Third Reich in the mass murder of millions of people. Not only that, the Kiev regime has waged a war of aggression over the past year on the ethnic Russian people of eastern Ukraine – all with diplomatic, financial or military support from Washington, Berlin and other European capitals.
Yet this appalling reality of Western-backed resurrection of Nazism in Ukraine and its provocation to Russia is stupendously denied by Washington, Berlin, Paris and London and the Western mainstream news media.
This is why Frau Merkel’s haughty admonishment of Japan over its wartime past rings not only hollow – it is rank uber-hypocrisy.