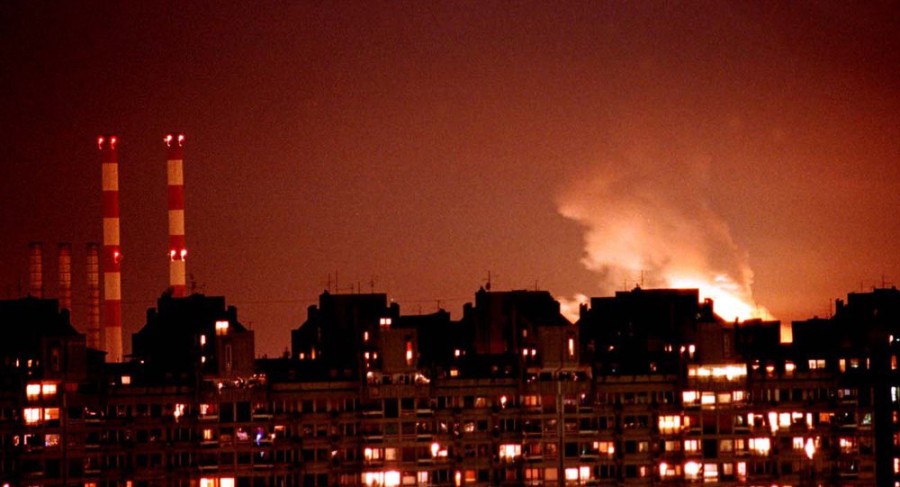 Reading the Western news media is like swimming in a goldfish bowl. News one day gives way to some other transient story the next, and so on and on. With the result that if one were to rely on the Western media for understanding on any particular issue, there is faint chance of proper assimilation. This is because there is typically negligible context, perspective or continuity – as well as, of course, misleading spin and outright disinformation.
To illustrate: one of the most bizarre – unwittingly bizarre – recent news reports was how US Secretary of State John Kerry made an urgent call to Russian counterpart Sergei Lavrov. Kerry reportedly needed Lavrov for help in clinching a breakthrough in the deadlocked nuclear negotiations with Iran.
For almost a week in Lausanne, Switzerland, America’s chief diplomat had been engaged in one-on-one talks with Iranian Foreign Minister Mohammed Javad Zarif in order to arrive at a «preliminary agreement» in the P5+1 forum.
Then the foreign ministers from the other P5+1 group – Britain, France, Germany, China and Russia arrived at the Lake Geneva resort to add some push for achieving the framework accord. But of all the P5+1 representatives, it was Russia’s Sergei Lavrov whom Kerry reportedly turned to in order to add pivotal influence.
US State Department spokesperson Marie Harf even singled out Lavrov with praise for his personal help and expertise during the fraught Lausanne talks.
In the end, the long-running nuclear dispute is still far from resolved and negotiations will roll on to the next deadline set for the beginning of July… and who knows after that?
But let’s rewind here a moment. At Lausanne, according to the Western media’s own reports, Washington called on Moscow in particular, to help snatch what President Obama subsequently hailed as a «diplomatic triumph» and «historic agreement» in US-Iranian relations.
Now hold that thought. This is the same Moscow whom the West has spent the most part of the past 12 months demonising and vilifying over the Ukraine crisis, accusing Russian President Vladimir Putin of land-grabbing and threatening the entire security of Europe – if not the world.
American President Barack Obama, you will recall, at the United Nations General Assembly last year publicly branded Russia and its alleged annexation of Crimea as being one of three major global security concerns, along with Islamic State terrorism and the outbreak of Ebola disease in West Africa. How’s that for audacious American impudence and provocation towards Russia?
The White House’s top diplomat John Kerry has also over the past year managed to fluently garble and make a mockery of historical facts to slander Vladimir Putin for behaving like a «20th Century dictator» who is trying to change country borders down the «barrel of a gun».
Washington has proceeded on the back of that calumny to unleash a barrage of economic and diplomatic sanctions against Russia, and it has goaded the European Union to follow suit – all on the basis of unproven, sensationalist allegations about Russia’s involvement in the Ukraine conflict.
At Washington’s behest, the NATO military alliance has redoubled its already sizeable loitering on Russia’s border over the past year – in flagrant contravention of previous treaties.

Currently, the US is leading the biggest NATO war manoeuvres ever in Europe under the rubric of Operation Atlantic Resolve, which comprises tens of thousands of troops, warplanes, tanks, anti-ballistic missiles and warships on offensive drills pointed at Russia – stretching from the Baltic to the Black Sea.

Naturally, and reasonably, Moscow has responded by staging major defensive military manoeuvres within its own territory, from the Arctic to the Steppes to Siberia.
Considering this unprecedented propaganda, economic and military aggression that the US and its Western allies are projecting at Russia it is not an exaggeration to say that a form of American-led «hybrid war» is being waged at full pelt.
Added to these offensive measures is the vast support given to the reactionary Neo-Nazi regime in Kiev, which is openly persecuting ethnic Russians through bans on language and culture, as well as proposing mass detention centres for «terror suspects».
On top of billions of dollars in financial aid, courtesy of expropriated Western taxpayer money, this month the US has begun delivery of hundreds of armed military Humvees to Kiev which are to be deployed in the Donbas conflict zone. This intervention by the US will undermine the fragile Minsk ceasefire that was worked out in mid-February under the aegis of Moscow, Berlin and Paris, thus inciting more violence on Russia’s western border.
The Americans are also slated to supply up to $1 billion-worth of lethal munitions in the forthcoming Pentagon budget, as well as sending 300 military trainers this month to join Kiev’s notorious National Guard units. These Nazi SS-styled units have been reported carrying out systematic human rights violations against the ethnic Russian population of the Donetsk and Luhansk self-proclaimed republics since the Western-backed Kiev regime launched its so-called anti-terror operation on eastern Ukraine last year. More than 6,000 people have been killed in that onslaught, most of them civilians. Over one million have been turned into refugees at great expense to Russia’s humanitarian efforts.
Yet, mind-bogglingly, amid this insane climate of Washington-driven hostility towards Russia, John Kerry appeals to Sergei Lavrov to pull him out of a diplomatic hole over the Iranian nuclear dispute.
Only the brainwashed, bamboozling Western mindset could get away with such an astounding feat of double-think and arrogance. In the blink of an eye, Russia is portrayed as a Hitlerian threat to world security, and then in the next blink, it is called upon as a «partner» to resolve the nuclear impasse with Iran.
The irony of Western-sanctioned Moscow being enlisted by Washington to assist in a deal supposedly aimed at lifting Western sanctions off Tehran is beyond hilarious. It either shows that the Western demonisation of Russia is, at bottom, groundless and disingenuous, or that Western blind arrogance is crass beyond words.
Sergei Lavrov is a consummate diplomat, probably the best there is in the world. His skills in negotiating thorny issues is proven, as for example over the Syrian chemical weapons debacle at the end of 2013, which prevented another US war in the Middle East. Lavrov stands head-and-shoulders above John Kerry and his lightweight British, French and German counterparts. The Russian diplomat is cultured and urbane, with a depth of historical and political understanding of world affairs that dwarfs his Western opposites. But maybe it’s time the kid-gloves came off to put these conceited Western wise-guys in their place.
Russia together with China could jointly make a very public call on the never-ending nuclear wrangle.
Despite the recent Lausanne «accord» it seems that this merry-go-round is going to keep spinning beyond the supposed June 30 deadline – largely because of Washington’s mercurial «interpretation» of what defines Iranian compliance. Obama’s latest talk this week about sanctions relief for Iran being «phased in» over 10-15 years does not bode well for an orderly, peaceful resolution in the next three months.
If the Western powers are the ones who are impeding a final settlement to the nuclear standoff – and the hunch is that they are the guilty ones – then they need and deserve to be called out. The decades-long Western-imposed embargo on Iran over its alleged, but unfounded, nuclear ambitions has gone on for far too long. It is not just a matter of justice for the long-suffering Iranian people; the longer this dispute continues without a reasonable, mutual ending, the more risk there is that the rightwing crazies in Washington and their gung-ho Israeli clients will eventually instigate the war that they are feverishly itching for.
Russia and China could turn the political tables on Washington and its Western minions by declaring which party to the nuclear row is the definitive problem. World public opinion and shame will also follow suit and add pressure to bring this dangerous standoff to an end. Even at it is, the majority of the American public are in favour of cutting a final deal with Iran, according to a recent poll by the Washington Post. That number would increase if Americans knew that it was their so-called leaders in Washington who are forestalling a full agreement for no reasonable reason other than playing Western power-politics with Iran or pandering to the Israeli and Saudi lobby.
Washington seems to think it can treat Moscow, and Beijing, like a play-thing. On one hand, issuing threats, waging aggression and slapping on sanctions over baseless accusations; then on the other hand Washington makes «friendly» phone calls when it finds itself in a diplomatic jam. Russia certainly owes Washington no such favours given the pillorying it has been subjected to over the past year.
What Washington needs is a severe reality-check about its own hypocrisy, double-think and duplicity. Naming and shaming over the Iranian nuclear debacle will call out who just is the real pariah and who is the real partner to world peace.