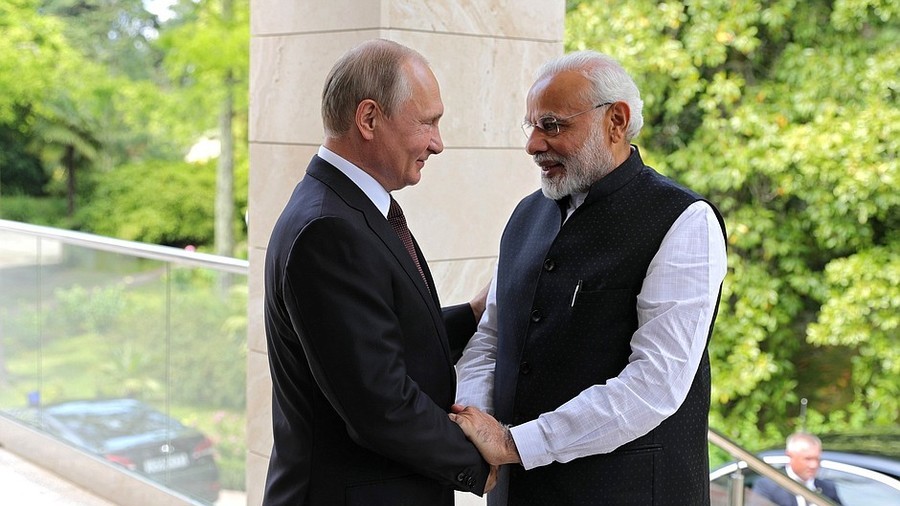 Vladimir Putin and Narendra Modi were all smiles at the conclusion of their informal summit, with Moscow officials saying that New Delhi has moved one step closer to free trade with the Russia-led Eurasian Economic Union.

“Extremely productive discussions with President Putin. We reviewed the complete range of India-Russia relations as well as other global subjects,”tweeted the Indian prime minister on Monday evening. “Friendship between India and Russia has stood the test of time. Our ties will continue to scale newer heights in the coming years.”

Modi took a yacht ride with the Russian president, visited a cultural center, and delivered a speech to students on Monday, with the Indian media outlets dedicating hours of live coverage to the visit.

“Relations between Russia and India need no additional introductions and have extremely deep roots,” Vladimir Putin told the media at the Black Sea coast resort. “But lately we have managed to give them a new impetus.”

READ MORE: Why Modi’s ‘no agenda’ meeting with Putin is anything but

Modi has used similar summits with China and Germany to firm up relationships with world leaders, and the one-day visit, at Putin’s invitation following his re-election in March was not expected to yield new official agreements.

Nonetheless, several specific breakthroughs were made public. The biggest is that India plans to conduct substantive talks on joining the customs-free zone Eurasian Economic Union, a trading bloc comprising Russia, and four other former Soviet republics, including Kazakhstan. The idea was touted last year, but Russia’s foreign minister Sergey Lavrov said that substantive talks will begin in autumn.

Lavrov noted that trade between two countries already rose by 20 percent last year, and while Russia is already participating in a highly-publicized project to construct India’s most productive nuclear power station, he also noted the possibility of new promising opportunities in oil and LNG that largely remain untapped so far.

The most urgent topic of discussion ahead of the summit was expected to be the impact of recent American CAATSA sanctions on Russia’s weapons supplies to India – the countries are each other’s top international arms trade partners – but neither leaders addressed the issue head-on. Nonetheless, Putin spoke of a “an extremely high-level strategic partnership” in the area, while India’s foreign ministry published a series of slides highlighting multiple areas of cooperation between the two countries.