A Dangerous Turn in US Foreign Policy Conn HALLINAN 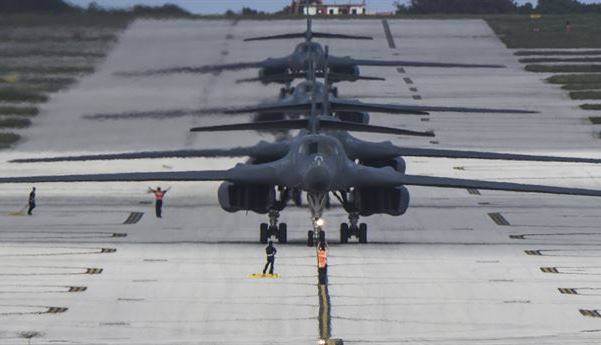 The Trump administration’s new National Defense Strategy is being touted as a sea change in U.S. foreign policy, a shift from the “war on terrorism” to “great power competition,” a line that would not be out of place in the years leading up to World War I. But is the shift really a major course change, or a re-statement of policies followed by the last four administrations?

The U.S. has never taken its eyes off its big competitors.

It was President Bill Clinton who moved NATO eastwards, abrogating a 1991 agreement with the Russians not to recruit former members of the Warsaw Pact that is at the root of current tensions with Moscow. And, while the U.S. and NATO point to Russia’s annexation of the Crimea as a sign of a “revanchist” Moscow, it was NATO that set the precedent of altering borders when it dismembered Serbia to create Kosovo after the 1999 Yugoslav war.

It was President George W. Bush who designated China a “strategic competitor,” and who tried to lure India into an anti-Chinese alliance by allowing New Delhi to violate the Nuclear Non-Proliferation Treaty. Letting India purchase uranium on the international market— it was barred from doing so by refusing to sign the NPT—helped ignite the dangerous nuclear arms race with Pakistan in South Asia.

And it was President Barack Obama who further chilled relations with the Russians by backing the 2014 coup in the Ukraine, and whose “Asia pivot” has led to tensions between Washington and Beijing.

So is jettisoning “terrorism” as the enemy in favor of  “great powers” just old wine, new bottle? Not quite. For one thing the new emphasis has a decidedly more dangerous edge to it.

In speaking at Johns Hopkins, Defense Secretary James Mattis warned, “If you challenge us, it will be your longest and worst day,” a remark aimed directly at Russia. NATO ally Britain went even further. Chief of the United Kingdom General Staff, Nick Carter, told the Defense and Security Forum that “our generation has become use to wars of choice since the end of the Cold War,” but “we may not have a choice about conflict with Russia,” adding “The parallels with 1914 are stark.”

Certainly the verbiage about Russia and China is alarming. Russia is routinely described as “aggressive,” “revisionist,” and “expansionist.” In a recent attack on China, US Defense Secretary Rex Tillerson described China’s trade with Latin America as “imperial.”

But in 1914 there were several powerful and evenly matched empires at odds. That is not the case today.

While Moscow is certainly capable of destroying the world with its nuclear weapons, Russia today bears little resemblance to 1914 Russia, or, for that matter, the Soviet Union.

The U.S. and its allies currently spend more than 12 times what Russia does on its armaments–$840 billion to $69 billion—and that figure vastly underestimates Washington’s actual military outlay. A great deal of U.S. spending is not counted as “military,” including nuclear weapons, currently being modernized to the tune of $1.5 trillion.

The balance between China and the U.S. is more even, but the U.S. outspends China almost three to one. Include Washington’s allies, Japan, Australia and South Korea, and that figure is almost four to one. In nuclear weapons, the ratio is vastly greater: 26 to 1 in favor of the U.S. Add NATO and the ratios are 28 to 1.

This is not to say that the military forces of Russia and China are irrelevant.

Russia’s intervention in the Syrian civil war helped turn the tide against the anti-Assad coalition put together by the US. But its economy is smaller than Italy’s, and its “aggression” is largely a response to NATO establishing a presence on Moscow’s doorstep.

China has two military goals: to secure its sea-borne energy supplies by building up its navy and to establish a buffer zone in the East and South China seas to keep potential enemies at arm’s length. To that end it has constructed smaller, more agile ships, and missiles capable of keeping U.S. aircraft carriers out of range, a strategy called “area denial.” It has also modernized its military, cutting back on land-based forces and investing in air and sea assets. However, it spends less of its GDP on its military than does the US: 1.9 percent as opposed to 3.8 percent.

Beijing has been rather heavy-handed in establishing “area denial,” aliening many of its neighbors—Malaysia, Vietnam, the Philippines, and Taiwan—by claiming most of the South China Sea and building bases in the Paracel and Spratly islands.

But China has been invaded several times, starting with the Opium Wars of 1839 and 1856, when Britain forced the Chinese to lift their ban on importing the drug. Japan invaded in 1895 and 1937. If the Chinese are touchy about their coastline, one can hardly blame them.

China is, however, the US’s major competitor and the second largest economy in the world. It has replaced the US as Latin America’s largest trading partner and successfully outflanked Washington’s attempts to throttle its economic influence. When the US asked its key allies to boycott China’s new Asian Infrastructure Investment Bank, with the exception of Japan, they ignored Washington.

However, commercial success is hardly “imperial.”

Is this a new Cold War, when the U.S. attempted to surround and isolate the Soviet Union? There are parallels, but the Cold War was an ideological battle between two systems, socialism and capitalism. The fight today is over market access and economic domination. When Secretary of State Rex Tillerson warned Latin America about China and Russia, it wasn’t about “Communist subversion,” but trade.

There are other players behind this shift.

This is not to say that the U.S. has altered its foreign policy focus because of arms company lobbies, but they do have a seat at the table. And given that those companies have spread their operations to all 50 states, local political representatives and governors have a stake in keeping—and expanding—those high paying jobs.

And many of the Democrats are ahead of the curve when it comes to demonizing the Russians. The Russian bug-a-boo has allowed the Party to shift the blame for Hillary Clinton’s loss to Moscow’s manipulation of the election, thus avoiding having to examine its own lackluster campaign and unimaginative political program.

There are other actors pushing this new emphasis as well, including the Bush administration’s neo-conservatives who launched the Iraq War. Their new target is Iran, even though inflating Iran to the level of a “great power” is laughable. Iran’s military budget is $12.3 billion. Saudi Arabia alone spends $63.7 billion on defense, slightly less than Russia, which has five times the population and eight times the land area. In a clash between Iran and the US and its local allies, the disparity in military strength would be a little more than 66 to 1.

However, in terms of disasters, even Iraq would pale before a war with Iran.

The most dangerous place in the world right now is the Korean Peninsula, where the Trump administration appears to be casting around for some kind of military demonstration that will not ignite a nuclear war. But how would China react to an attack that might put hostile troops on its southern border?

Piling onto Moscow may have consequences as well. Andrei Kostin, head of one of Russia’s largest banks, VTB, told the Financial Timesthat adding more sanctions against Russia “would be like declaring war.”

The problem with designating “great powers” as your adversaries is that they might just take your word for it and respond accordingly.