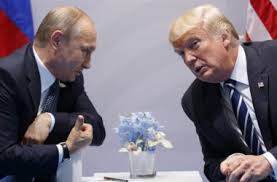 The United States, Russia and Jordan will implement and guarantee a ceasefire in south-western Syria, covering Daraa, Quneitra and Sweida. The ceasefire will coincide with the creation of a new de-escalation zone in the region which will be monitored jointly by Russia, the US and Jordan. The details of this were enshrined in a memorandum on de-escalation zones agreed between Washington, Moscow and Amman.

Sergey Lavrov also confirmed that the new ceasefire and de-escalation zone in south western Syria does not replace but compliments the de-escalation zones established in the Astana Memorandum which was signed in May of 2017.

The Presidents of Russia and the US have agreed to set up a bilateral channel of communication between Moscow and Washington on the continuing war in Donbass and the deteriorating situation in Ukraine.

Meetings will shortly be held in Moscow between the Russian Foreign Ministry and the US envoy for Ukrainian issues who was named today by the US as Washington’s former ambassador to NATO, Kurt Volker.

The discussions will work towards implementing the Minsk agreements for a ceasefire in the Donbass war.

Lavrov confirmed that Donald Trump did not offer a unique opinion nor any solutions to the Donbass-Ukraine crisis beyond a commitment to the existing Minsk agreements and the existing Normandy format for peace.

It was also confirmed that Trump and Putin spoke about the Crimean peninsula but no further details were given on this matter.

Sergey Lavrov stated that Donald Trump accepted President Putin’s assurances that Russia played no part in any hacking or meddling in the recent US Presidential election.

Russia and the US will continue to discuss this issue.

Sergey Lavrov conveyed Donald Trump’s assertions that the obsession in the US with Russigate is “bizarre”.

Russia and the US affirmed their commitment to cooperate in cyber-security against terrorism, paedophilia, suicide encouragement and organised crime activities.

Sergey Lavrov and Rex Tillerson will be in close communication over the issue of de-escalation on the Korean peninsula.

5. Russian Ambassadors/property in the US and Russian nationals in US prisons

Donald Trump has promised to work with Russia to expedite the process of bringing new Russian ambassadors and embassy staff to the United States after Barack Obama kicked them out late in Obama’s final period in power.

The two sides will also work together on the restoration of Russian property in the US seized by the Obama regime.

The two sides will also continue to work on the issue of human rights matters concerning Russian  nationals in US custody including Viktor Bout.

Lavrov refused to call Trump and Putin friends and instead said that, the meeting was a,

“Constructive atmosphere because both Presidents were driven by their national interests. They also both understood that both countries can only do this (cooperate positively) if we search for a balance between the interests of both our countries”.

No future meetings were planned but both sides are committed to the agenda outlined in the meeting.

By far the most important result of the meeting was the creation of a de-escalation zone for south west Syria and the accompanying ceasefire.

This represents the second time that Russia has brought a state whose position has been adversarial in respect of the Syrian government into a political peace process that explicitly rejects regime change and seeks to work constructively with Russia.

The last time this happened was when Russia successfully brought Turkey into the Astana peace talks.

Some have speculated that Iran is being jettisoned from the peace process in Syria in favour of the US and America’s ally Jordan, but it is still vastly premature to make such a statement definitively. America’s deteriorating relationship with Turkey over the US support of Kurds in Syria and possibly also Iraq appears not to have been discussed.

However, the fact that the US, Russia and Jordan will be guarantors of the ceasefire in parts of Syria bordering Israel, as opposed to Iran which Israel has no relations with, means that Israel could cease its illegal acts of military aggression against Syria, thus giving the Syrian Arab Army and its Russian partners a better opportunity to rid south western Syrian of al-Qaeda terrorists.

Whereas Putin scored a geo-political victory in bringing America into a peace process that does not involve militant regime change, Donald Trump scored something of a domestic political victory. He can now say that after just a few months in office, he was able to reach an agreement with Russia while Obama failed to achieve anything remotely close to this.

Much like questions over Turkey’s participation in the Astana process, there are no guarantees that America will live up to its obligations or that the de-escalation zone in south west Syria will work. In this sense, as with Astana, the political and geo-political implications are more important than the military implications.

Militarily speaking, Syria with Russian aid is quickly finishing off most terrorist groups west of the Euphrates. Astana did not inhibit this (if anything since the Astana memorandum was signed, this has become expedited) and there is no saying that this new ceasefire will have any negative impact on this. It could have a positive one, especially if it causes Israel to cease its aggression against Syria, however temporarily.

In respect of Donbass, it is clear that Donald Trump has few concerns about this conflict which realistically means that he will be less likely to placate the fascist regime in Kiev than his predecessor Barack Obama was. Beyond this, there were really no startling or new developments on this issue.

Finally, on the Russian hacking allegations, it is clear that Donald Trump believes Vladimir Putin more than he believes members of the Democratic party, some Republicans and the US mainstream media. This should not come as a surprise based on previous statements by Trump.