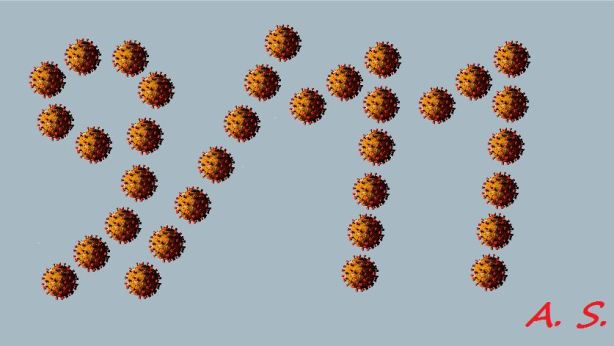 Almost 20 years ago, in September 2000 the „Project for the New American Century“ issued the paper „Rebuilding America´s Defenses“. On page 60 you find the announcement of Fascist_atrocities! It reads:

The US Power Elite has many times declared China to be the most “dangerous opponent” to US “exceptionalism” and the US effort to bring_the_whole_world_under_control. Especially the Chinese-Russian efforts to build a “Eurasian Cooperation” are a big nightmare_of_the_US_Power_Elite. The Corvid-pandemic has allegedly started in China in the Wuhan province. What almost everywhere in the mainstream media is missing is the fact that last year the Military_World_Games 2019 took place in Wuhan with a large – though not very successful – US delegation. Strange coincident! Is it really absurd to turn to the “usual suspect” (the more since there are indications of “advanced_knowledge”)?

And another strange incident has to be noted: around that time there was the “Event_201”, organized by the Johns Hopkins Center for Health Security in partnership with the World Economic Forum and the Bill and Melinda Gates Foundation. They “played” with a scenario of a Corona virus pandemic taking 65 Million lives worldwide. The organizers later hurried to deny with a “Clarification” that this was a “prediction” of the current crisis. This is another point to harbor suspicions that this might be an act of bio terrorism perpetrated by the US Power Elite.

Alternative media and Chinese sources (and Iranian and Russian) have come_up_with_such_a_suspicion, dubbed “Conspiracy Theories” in Western media, where such thoughts are dismissed as absurd. One argument brought forward against the suspicion is: if the US would apply a bio weapon, then there should be more deaths. Likewise people reject such a suspicion because the pandemic is also spreading to Western countries. Are those really valid arguments against the suspicion?

Let´s look at the effects of the crisis up to now and let´s ask what of them could be in the interest of the US Power Elite. The Chinese economy is heavily affected by the crisis, likewise are the economic relations of China with Europe and the EU, thus the Chinese-Russian efforts for the Eurasian Cooperation. Also Iran is struck hard by the pandemic. The EU – since long being targeted by the US Power Elite – is in turmoil. People in most Western countries are in panic, just looking at their own individual health, being driven into social isolation and no more looking at the things the US Empire to doing to the world as far as the danger of war, the ecologic disaster and growing social divisions are concerned. People are more and more obedient and ready to accept authoritarian solutions. Moreover many companies are in heavy crisis, getting ready to be overtaken by large Hedgefonds like “Blackrock” etc.. Everyone who has looked into the nature of the US Power Elite will know, a whole number of its members must be jubilating.

But, I hear some people say, the US is also affected by the disaster! There could be two answers to that. One is: think of “the Sorcerer´s Apprentice” (the famous poem by Goethe).

The second answer could refer to an even more cynic aspect of the Power Elite. Do you really think that Elite is concerned with the public wellbeing in the US? Who will suffer most losses in the US? Those will be members of the poor people, mainly African Americans and “Latinos” as well as poor whites. The real Power Elite believes they could survive anything “well_bunkered” and doesn´t care a damn for those ones, as long as they expect a favorable result for their aspirations at large. Well, the whole thing could cost Trump his reelection. So what? The Neocon Power Elite wasn´t happy with Trump anyway, though they have put him somehow “on_track”. They have pushed Bernie Sanders aside and are preparing for Biden to become their puppet in office!

But that all doesn´t mean that the US Power Elite might not have miscalculated on the long run and hopefully they have. Taking all the effects into consideration there is no sound point to wipe the suspicion away that this crisis has been orchestrated by the powers that – shouldn´t – be!

But there is another important point for us trying to organize resistance against those powers: surely there comes exaggeration into the play, since panic is an aspired goal of “Disaster_Capitalism” (how Naomi Klein characterized the system). But we would be misguided if we think the whole thing as such is a “hoax by the powerful” to drive us into obedience. Yes we should be driven into obedience, but not by a hoax, but by a true act of bio terrorism! If the resisting forces would make people believe just in a hoax, we would rightfully be held responsible by the public for the tragic outcomes. And be sure, if I´m right and this has been orchestrated, those forces will also push_fake_analysis like “this all is a hoax” in order to step up the disaster! They work on various levels and like absurd fake “analysis” as part oft desinformation, as many examples show.

We should make people aware of the glaring contradictions in the “official narrative”. We have to expose the power structures that have brought about the crisis. These power structures are directly tied to globalized neoliberal Capitalism, imperial efforts for World domination and the class question. And there is a striking parallel.

The Power Elite is obviously so self confident, that it announces its atrocities with impunity. That was the case with “Nine Eleven”.

Let´s go back to the above mentioned “Rebuilding America´s Defenses”. It is strange enough that one can find on page 51 something that sounds like the announcement of “Nine Eleven”. After talking about the difficulties to “sell” to the Western public after the end of the Cold War the stepping up of armament one reads:

This was written one year before Nine Eleven. Not too astonishing for those who have studied the absurdities of the “official narrative” about the event.

Anyway, Nine Eleven was used to legitimize the “War on Terror” which is in reality a war of terror against the Southern Hemisphere and against civil rights. It did not only kill hundreds of thousands but polluted_whole_regions by depleted Uranium. The effect is similar to the pollution of Vietnam by “Agent Orange” during the Vietnam War. It was also part of the effort for total World control.

In my eyes the similarities between Nine Eleven and the Corvid-19 crisis are striking, though the US Power Elite is this time not blaming anyone for it (apart from some pointing to China). Both events to my view serve geo-strategic aims and both are followed by enormous social, economic and political consequences which the US Power Elite tries to get maximum gains of. Imagine the US would be in possession of the only means against Covid-19! They tried already to_get_exclusive_access to something developped by the German company “Curevac” and possibly buy the whole companym, which luckily failed.

Anyway, people are right to take care of their health, follow sound advises to protect themselves and others, care for others by “keeping distance” and be diciplined on that. But likewise it is highly important to understand how such disasters are probaly orchestrated and who is benefitting from it! If we, “the people”, do not organize ourselves and build true resistance we will fall victim to the self appointed “Masters of the Universe” and their weird concepts, which include ideas of exterminating those ones being “of no use” for the super rich!