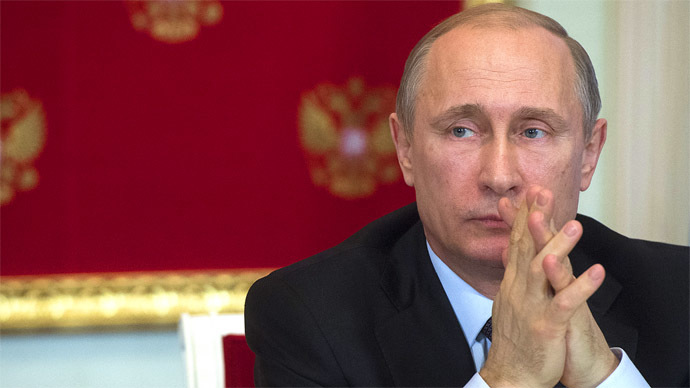 Today marks 15 years since Russian President Vladimir Putin’s first inauguration. RT looks back at his years as president and all the important benchmarks on the way.

After former Russian leader Boris Yeltsin resigned back on December 31, 1999, his Prime Minister Vladimir Putin took over the reins, inheriting a country in a dire economic situation and struggling with lawlessness.

Thus, the largely-unknown Putin was faced with challenges. The Western press instantly took a liking to him, some saying he “combined liberal-mindedness and toughness that seem to appeal to Russian people.”

First, Putin dealt with the crisis in the Russian Republic of Chechnya, which at the time was a terrorist hotspot. He pronounced what would become one of the catchphrases that illustrate his powerful political hand: “We will hunt down the terrorists everywhere, in airports, and if we capture them in toilets, we’ll waste them in the outhouse.”

Thus, following a string of terror attacks across Russia, Putin started the Second Chechen campaign and brutal fighting ensued. The ‘iron fist’ didn’t win Putin many admirers in the foreign media, but earned him a great deal of respect and support at home.

Next he turned his attention to the oligarchs, hugely powerful in Russia at the end of the 1990s, and one by one, several of the tycoons toppled. However, the road to coping with their immense influence was bumpy.

“Some of them came into my office, and they said to me, ‘Do you realize you’ll never be president?’” Putin recalled in his latest interview with the Russian TV presenter Vladimir Soloviev.

Once Putin had dealt with the issues at home, it was time to work on Russia’s foreign ties.

“I looked the man in the eye, I found him to be very straightforward and trustworthy. We had a very good dialogue. I was able to get a sense of his soul,” US president George W. Bush said at the 2001 Slovenia summit.

However, Putin’s first term wasn’t getting any easier: the tragedy with the ‘Kursk’ submarine in August 2000 caused anger and frustration at home, and humiliation abroad, when all 118 sailors and officers on board perished.

Despite this, in 2000-2004, Russia witnessed a dramatic rise in GDP, and the economy forged ahead with the oligarchs onside. This sealed Putin’s path to a second presidential term, which started with one of the greatest tragedies modern Russia had to go through: the Beslan school siege. Over 1,000 people were held hostage in North Ossetia on the first day of the school year – 800 of them children. Almost 200 kids died in the three-day siege.

Security forces and the president himself were often blamed for the tragic events, and state control tightened to cope with Islamist extremists. This, in turn, triggered claims in the Western media that Putin was “getting control of both houses of the parliament, of the political parties” and also “suppressing civil society groups that don’t toe his line.”

This, however, didn’t seem to lower Putin’s popularity among his public, whom he never ceased to surprise: from singing and piano playing to judo and racecar driving, the cameras captured it all.

Precluded in 2008 by the constitution from running for a third consecutive term, Putin became the Russian Prime Minister, alongside new leader Dmitry Medvedev.

That year, the global financial crisis rocked the Russian economy.

“A year ago, on this very stage, our American friends told us about the fundamental of the US dollar,” Putin noted during the World Economic Forum that year.

Russia slowly, but steadily, recovered from the crisis, and the middle class started growing the country, leading to another phenomenon known as ‘anti-Putinism’.

Claims of fraud during the 2011 parliamentary elections saw thousands take to the streets all over Russia. This made Putin’s 2012 victory in the presidential elections even more important for the majority of the public who supported him.

“I promised you we would win. We have won!” he declared to the cheering crowd after the results were announced.

By 2013, the Russian economy had grown tenfold under Putin, while the national debt was at one of the lowest levels in the developed world.

Of course, there was no better way to celebrate the dramatic changes than by hosting the Winter Olympics. Despite all allegations of corruption and terrorist threats on the ground, the Games went on without a hitch, with Russia at the very top of the medal table.

The victorious mood didn’t last long, though: a violent coup in neighboring Ukraine placed Russia in a tough position regarding Crimea, where ethnic Russians constitute 65 percent of the population.

The Crimean Peninsula is also home to the Russian Black Sea Fleet and thousands of military men.

“We had to take measures to prevent the situation from developing in the way it has [subsequently] done in eastern Ukraine: with tanks and well-armed radical nationalists. Our servicemen acted reasonably, decisively and professionally,” Putin later explained.

In the weeks following the coup, a referendum was rapidly organized, with 96 percent of voters saying an eager ‘yes’ to joining the Russian Federation.

“It was about millions of Russians, millions of our compatriots, who needed our help and support,” Putin said.

The move triggered Russia’s suspension from the G8 and severe sanctions from the West.

After 15 years in power, Vladimir Putin has made one thing crystal clear: he is not one to shy away from a challenge.

“Maybe our bear needs to sit quietly, eat his berries and honey, maybe then he will just be left alone. But no – they’ll always be trying to put him on a chain, and as soon as they do that, they’ll pull out his teeth and claws,” the president said during one of the recent Q&A sessions he regularly holds, both with the press and with the members of the community.