Dr. Sreeram Chaulia is Professor and Dean at the Jindal School of International Affairs in Sonipat, India. His latest book is ‘Modi Doctrine: The Foreign Policy of India’s Prime Minister’.
Get short URL
299
The revelation by Turkish President Recep Tayyip Erdogan that his government has paid Russia a deposit and signed an agreement for buying the S-400 anti-aircraft system is a setback for the US-led military bloc NATO.

Despite internal disagreements and strains, no member state has until now broken the unwritten norm underpinning the alliance since 1949 of avoiding strategic defense cooperation with Russia. That Erdogan could contemplate such a bold démarche and undermine the existential anti-Russian logic of NATO says much about how dramatically the US is losing its grip over its allies.

While key American allies fretting and fuming about Washington’s commitment to fulfilling its obligations to them has been around off and on ever since the end of the Cold War, the phenomenon of treaty-bound partners defiantly and openly deserting ship is a worrisome possibility staring at the US today. And the credit for bringing the global American alliance system to a crisis point goes to the captain in charge, President Donald Trump, who has managed to deconstruct a carefully built international structure of trust and faith since World War II in just eight months in the Oval Office.

‘What did they expect?’ Erdogan rebukes NATO critics over purchase of Russian S-400

The aphorism that empires self-destruct has more than a grain of truth to it in the context of Trump’s disdain for allies and their interests. In Turkey’s case, although Erdogan had been miffed by Obama for the latter’s alleged abetment of the July 2016 putsch to overthrow the elected regime in Ankara, his troubles with Trump have exacerbated matters and forced him to do radical maneuvers.

Trump’s decision to directly supply arms to Syrian Kurds in May 2017 despite fervent Turkish lobbying against it, as well as the lack of progress in Turkey’s demand for extraditing the Sufi cleric Fethullah Gulen from his perch in Pennsylvania, have dampened initial hopes in Ankara that the new US administration would be sympathetic.

The ongoing legal investigations and charges against Turkish security guards and politicians in the American justice system have added insult to injury from Erdogan’s perspective. His rant asking the US “what type of legislation is this?” and “what type of law?” is a sign of frustration and suspicion that Trump will keep Erdogan under pressure using some card or the other until Turkey jettisons its own interests and submits to America’s will.

An entrenched and grandiloquent politician like Erdogan would naturally react to such slights and threats by chasing new alignments to teach the US a lesson. The S-400 purchase from Russia is a retort in the face of a Trump who is taking Turkey’s alliance loyalty for granted.

That Trump has no sense and sensibility for what it takes to sustain foreign alliances is obvious from the hash he has made of the US’ relationship with another long-time friend, Qatar. Blithely indifferent to the fact that Qatar hosts the largest American military base in the Middle East from which the US military has been waging wars in Syria, Iraq, and Afghanistan, the US president fell into a trap set by another close ally, Saudi Arabia, and blatantly took Riyadh’s side in its fratricidal tussle with Doha for supremacy among the Gulf Arab kingdoms. Buying the Saudi accusations that Qatar is a sponsor of terrorism and is too pally with Iran, Trump has willfully weakened the Sunni Arab coalition which historically toed the American line in the region.

So egregiously discombobulated is the Trump administration’s approach to the economic blockade and ultimatums on Qatar by Saudi Arabia, the United Arab Emirates (UAE), Bahrain, and Egypt, that Trump’s own Secretary of State admitted that he differs from his boss. A supposedly pro-Qatar actor, Rex Tillerson has bemoaned the fact that life was a lot easier when he was CEO of Exxon Mobil rather than in the US government, which is “not a highly disciplined organization, decision making is fragmented, and sometimes people don’t want to take decisions, coordination is difficult.”

Facing a US administration that is egging Saudi Arabia on and also paradoxically posturing as a peace broker, Qatar drew lessons similar to those of Turkey. Doha inched closer to Iran and Russia and also involved other neutral nations like Oman and Kuwait to beat back the Saudi challenge. That Qatar did not oblige its Gulf rivals on even one of their demands and stood its ground in spite of Trump’s rants against it shows how much leverage the US has lost in the Middle East.

In Asia, where the security situation is sharply deteriorating, Trump has not helped one bit by committing characteristic hara-kiri through insulting and spurning treaty allies. South Korea, which is the essential actor for finding any solution to the nuclear and missile escalation by North Korea, has been dealt an untimely confidence shock by Trump’s aggressive calls for scrapping the “horrible trade deal” known as KORUS due to a rising trade deficit in favor of Seoul. For now, Trump has backed off from punishing South Korea due to “near-universal condemnation” from American corporate and political circles, but the episode confirms the worst fears in East Asia – that the US is no longer a magnanimous great power.

The mercantilist and economic nationalist ‘America First’ ideology which blames trading partners for the woes of the US working class goes against the bedrock principle with which the US built its post-World War II alliances in the Asia-Pacific— generosity as a provider of security, market access, and financing. Trump’s insistence that South Korea should pay $1 billion for the THAAD anti-missile system and his earlier jab that South Korea and Japan should acquire their own nuclear weapons have sown massive doubts about the historic assumption that the US bears costs to defend its allies and thereby earns their gratitude and acceptance.

As a crude salesman rather than a statesman, Trump’s offers to Seoul and Tokyo to buy“highly sophisticated military equipment” in the wake of the North Korean menace display how transactional his foreign policy is. Ally or foe, whoever shells out cash gets Trump’s thumbs-up and anyone who seeks the old arrangements of taking shelter under a big American tent will be told to take a walk. The patronage machine that was America and which attracted many due to its free public goods is being wound down.

Japanese Prime Minister Shinzo Abe is probably the only significant ally that Trump has not rubbed the wrong way, possibly due to the US president’s personal quirks and Abe’s assiduous courting of Trump from the moment he won the election. But on the question that really matters to Japan— will America stand up for it against a progressively assertive China and a fiery North Korea— Abe has no unambiguous strategic assurance from the Trump administration. Tokyo is watching with dismay as China’s sphere of influence expands to unprecedented levels in Asia and Trump blows hot and cold on Beijing with no doctrinal certainty.

The debate within Japan about developing preemptive military strike capabilities to strike North Korea on its own shows how low the estimation Trump enjoys in Tokyo is. Japan’s bid to restart the Trans-Pacific Partnership (TPP) agreement without the US, which pulled out the moment Trump entered the White House, is an indicator that even obedient allies have reached the limits of their patience.

Australia is also rethinking its traditional reliance on the American alliance and showing signals that it is ready to acquiesce to China’s inevitable supremacy. The scholar Hugh White’s analysis that Trump is pushing Australia into China’s lap because the US president “believes that allies are dispensable” and the former diplomat Stephen FitzGerald’s comment that Australia should adjust to “living in a Chinese world”are canaries in the coal mine.

Trump’s grumpy personal relations with Australian Prime Minister Malcolm Turnbull is a marker of a deeper malaise, where he devalues allies and demeans them.

The latest Pew Research Center survey tells a saga of how Trump bungled relations with Latin American nations. In Mexico, which has been the US president’s favorite whipping boy on trade and immigration, only five percent of respondents say they have confidence in Trump, as opposed to 49 percent for Obama by the time he was nearing the end of his tenure as president.

Trump’s forced renegotiation of NAFTA on the grounds that it has unduly advantaged Mexico and shortchanged the US has outraged Mexicans and dented their expectation that Washington will act as a fair neighbor.

By undoing the liberalizing policies of the Obama era towards Cuba and also suggesting wildly that the US has a “military option” for dealing with the political crisis in Venezuela, Trump has reincarnated the specter of the ‘ugly American’ and Yankee imperialism in Latin America.

If trade, migration, and terrorism once united the US and Europe as a single ‘West’ with more or less homogeneous values and shared interests, these issues have opened a huge chasm under Trump. The rebuffs aired by German Chancellor Angela Merkel and French President Emmanuel Macron on Trump’s policies and remarks over climate change, trade protectionism, and handling Islamist terrorism confirm a widening rift across the Atlantic Ocean. Macron’s recent call for rebuilding the European Union “to become a power that can face the US and China” harks back to Charles De Gaulle’s vision and suggests that the Europeans have given up on Trump’s leadership. 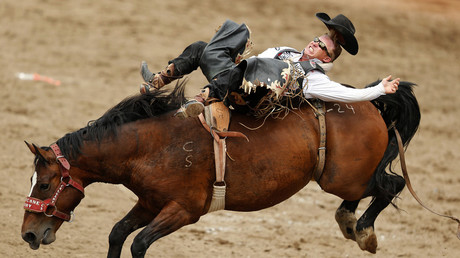 The US president’s choice of Poland – whose right-wing government has been a pain in the neck for the EU’s liberal establishment – to deliver a marquee speech lamenting that the West has lost the will to “defend our civilization” from Islamist terrorism and erosion of “culture, faith and tradition,”conveys that Washington will rally Britain and eastern Europe against western Europe. President of the European Commission Jean-Claude Juncker retorted to this divisive risk by warning he would “promote the independence of Ohio and the exit of Texas” if Trump continues to promote a Brexit domino effect in the EU. The US once invested everything within its might to preserve the ‘West’ as a unified entity. Today, the alliance is at rock bottom.

So far, the damage Trump has done to US alliances is not in the zone of total unraveling. All the aforementioned allies and partners are wary but not yet lost irretrievably from an American standpoint. Some partners are reluctantly renegotiating terms with Trump while trying to wait out his presidency and hoping for a return to the old, assuring liberal hegemonic America in the future.

Gideon Rose has argued in Foreign Affairs that having been inured to open-ended US support for over half a century, “major US allies couldn’t return easily to a self-help system, even if they wanted to.” But if Turkey’s turn to Russia is an early gauge of things to come, the unthinkable could well happen by the time Trump hangs up his boots. A wave of allies choosing autonomy over suffocating dependence is on the cards.