China, Cuba, and Venezuela Help to Contain The Coronavirus Italy and UK Rely on Help From Cuba, China, Venezuela to Fight Coronavirus – as US Steps up Brutal Sanctions
© Photo: Wikimedia

Italy requested doctors from China, Cuba, and Venezuela to contain the coronavirus, while Cuba rescued a ship of British citizens. Meanwhile, US sanctions worsen the toll of the Covid-19 crisis in Iran and Venezuela.

The sanctions that the United States has imposed on dozens of countries around the world, in an attempt to overthrow their independent governments, have only made the global coronavirus pandemic worse. But at the same time, some of these nations targeted by US economic warfare have taken the lead in the effort to contain the Covid-19 outbreak.

In fact, the local government in the north of Italy, a member of the European Union and NATO, has officially requested medical help from China, Cuba, and Venezuela — all countries demonized by the United States and EU, which in turn have provided Italy with little support.

The Italian government lamented that “not a single EU country” has responded to its request for medical equipment — unlike China, which immediately helped.

And it is not just Italy; Britain has also relied on Cuba to help it battle the contagious virus.

The northern Italian region of Lombardy has been particularly hard hit by coronavirus, with tens of thousands of cases and more than 1,000 deaths. The pandemic has devastated the region, which is the richest and most populous area in the country.

On March 15, Italy recorded 368 new deaths in just one day — more than the deadliest day in Wuhan, China, which successfully contained the virus.

In response to the crisis, Lombardy’s government requested that China, Cuba, and Venezuela send doctors and other medical personnel to help to contain the outbreak.

“We are in touch with Cuba, Venezuela, and China, who have made doctors available,” said Lombardy’s health minister, Giulio Gallera, in a press conference.

The local government in the major Italian city Milan has also relied on shipments of medical equipment from China.

A team of Chinese doctors arrived in Italy on March 12.

A team of Chinese health experts are in Iraq to help the country contain the #coronavirus outbreak. #COVID19

2,156 people are talking about this
European Union abandons Italy, after pushing privatization of health systems

The European Union, on the other hand, has left Italy out to dry.

Italy’s ambassador to the EU, Maurizio Massari, published an op-ed noting that his country requested support through the body’s Mechanism of Civil Protection, seeking medical equipment to contain the coronavirus outbreak.

“But, unfortunately, not a single EU country responded to the Commission’s call. Only China responded bilaterally,” Massari wrote.

In fact the European Union has done the opposite of help. The European Commission, which leads the EU, called on member states to cut medical spending and privatize health services at least 63 times between 2011 to 2018.

The EU’s obsession with cutting and privatizing state institutions has greatly weakened the continent’s health infrastructure, making it much more susceptible to deadly pandemics like coronavirus.

Cuba has been under an illegal US embargo since 1960 — which every country in the world (excluding Israel) votes to denounce each year at the United Nations. But this blockade has not stopped the small country from developing the best health system in all of Latin America.

Even the United Kingdom, one of the richest countries on the planet, has relied on Cuban help to contain the coronavirus.

The British government asked numerous countries in the Caribbean to let the cruise ship MS Braemar dock in their port, after there were several reports of coronavirus among its more than 1,000 passengers.

CNN noted that “British officials launched an intense diplomatic effort to find a country willing to take the” infected ship, but were rejected by Barbados and the Bahamas.

On March 16, Cuba agreed to assist Britain, offering to dock the MS Braemar in a Cuban port and help fly the passengers back to the UK.

Cuba’s Foreign Affairs Ministry declared in a statement, “These are times of solidarity, of understanding health as a human right, of strengthening international cooperation to face our common challenges, values that are key to the humanist practices of the Revolution and of our people.” 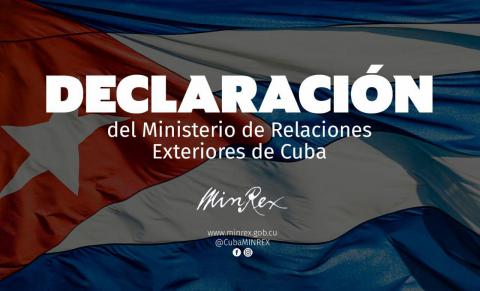 1,465 people are talking about this
US fights for control of potential coronavirus treatment and vaccine

While Cuba, China, and Venezuela — countries targeted by US economic warfare — are helping the world contain the coronavirus outbreak, Washington itself is working overtime to monopolize any potential treatments, so it can profit from them.

The Chinese government’s Wuhan Institute of Virology applied for a patent so it can produce this drug, which is called remdesivir. But the US company has been fighting tooth and nail to prevent Beijing from being able to manufacture it.

Why? Because Gilead Sciences’ stocks are skyrocketing, and investors are saying the corporation may soon be making a fortune.

The US government has also tried to bribe a German medical company that may be on the verge of developing a coronavirus vaccine.

President Donald Trump reportedly offered “large sums of money” to the German firm, CureVac, so that the United States could have exclusive rights to the treatment — which it could then sell to the rest of the world.

And while the Trump administration and US pharmaceutical companies are seeking to profit from the coronavirus pandemic, Washington is doubling down on its destructive economic warfare.

“It is ethically unacceptable that such sanctions be maintained against Venezuela,” Saab said. He called on Colombia and Brazil to stop their coup attempts against Caracas and to instead work together to contain the virus.

US sanctions have also greatly hindered Iran’s effort to fight Covid-19. Hundreds of Iranians have died, with thousands more affected, and Washington has prevented the country from buying much-needed medicine and medical equipment.

Iran’s foreign minister, Javad Zarif, denounced the US sanctions as a form of “medical terrorism.”

.@realDonaldTrump is maliciously tightening US’ illegal sanctions with aim of draining Iran’s resources needed in the fight against #COVID19—while our citizens are dying from it.

The world can no longer be silent as US #EconomicTerrorism is supplanted by its #MedicalTerrorism.

4,261 people are talking about this
“Efforts to fight COVID19 pandemic in Iran have been severely hampered by US sanctions,” Zarif added. “It is IMMORAL to let a bully kill innocents.”

In a letter to Secretary-General António Guterres, Zarif called on the United Nations and member states to ignore the “inhuman US sanctions” on Iran and push for them to be lifted.

In letter to UN SG @antonioguterres, I urge the world body—and member states—to disregard inhuman US sanctions on my country. And insist that they be lifted.

As the #COVID19 ravages Iran, we should recognize that viruses don’t discriminate. To fight them, neither should humans. 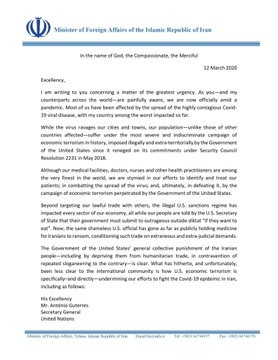 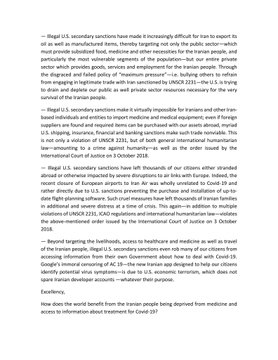 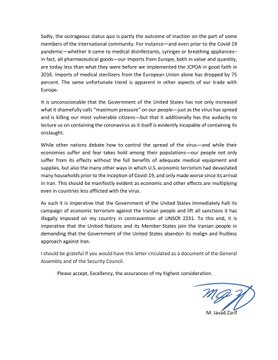 2,556 people are talking about this
China has also forcefully spoken out against the US sanctions on Venezuela and Iran.

In a press conference on March 13, a spokesman for China’s Foreign Affairs Ministry, Geng Shuang, condemned Washington’s blockade of Caracas.

“At a crucial moment in which the governments and peoples of all countries are fighting together against the epidemic of a new coronavirus, the American side, however, is determined to continue shaking the stick of sanctions against Venezuela, which is going against the minimum spirit of humanity,” the Geng said.

The Chinese government spokesperson likewise denounced US sanctions on Iran.

Noting that Beijing had sent a team of medical experts to help Iran contain Covid-19, the Foreign Affairs Ministry added, “We urge the US to immediately lift unilateral sanction on Iran. Continued sanction is against humanitarianism and hampers Iran’s epidemic response.”

We urge the US to immediately lift unilateral sanction on Iran. Continued sanction is against humanitarianism and hampers Iran’s epidemic response & delivery of humanitarian aid by the UN and other organizations. 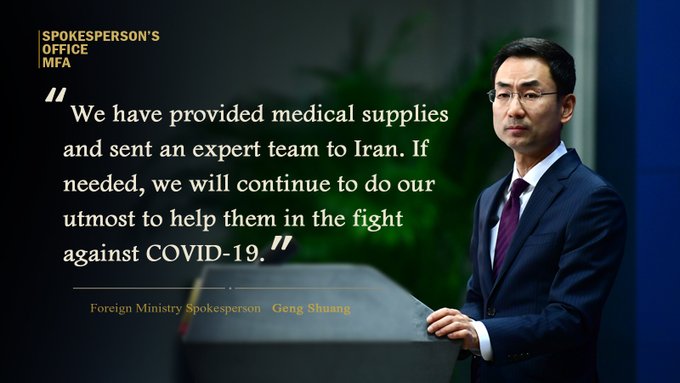 1,403 people are talking about this
thegrayzone.com
The views of individual contributors do not necessarily represent those of the Strategic Culture Foundation.
Tags:
coronavirusIranItalySanctionsVenezuela